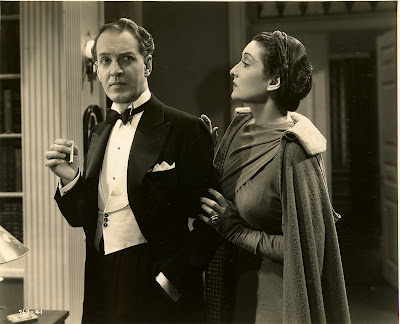 Otto Kruger and Gloria Holden in a movie I've yet to see, "Dracula's Daughter."

When I was in college I knew a guy who kept a list (on him no less) of every horror, science fiction and fantasy movie he had seen. he was a clerk at a bookstore in Chicopee and he'd quiz me about what films I had managed to see in the pre-cable, pre-home video days of the early 1970s.

Needless to say, I frequently failed.

With all of that increased access today, you can still miss a lot of movies. I know I do. I didn't see "Slither" until recently because I didn't want to go the theater by myself. Movie-going isn't a solitary activity for me and I don't feel like exposing my wife to films she wouldn't enjoy.

The still above is from my collection and it's a movie I've yet to see. I've not seen the film Vincent Price really enjoyed doing – "Dragonwyck" – either (although that one I do have in a collection of 20th Century Fox horror films). My to-be-viewed- shelf has way too many DVDs waiting for my eyeballs and a number of them are horror.

Unfortunately, "Dracula's Daughter" is not among them.

I believe I have a copy of it on VHS if you would like to have it.