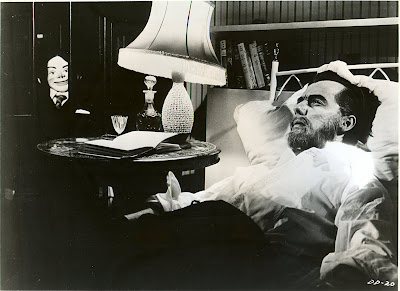 Well, the end of the month has been marked by getting a cold – which has knocked me for a loop – and additional stress at work. I have to say I've enjoyed my blogging experiment even though I did miss a few days. Considering my works schedule I didn't think I did too badly.

I was going to post my interviews with Geroge Romero and Larry Cohen but after an hour going through my clippings I just couldn't find either. Damn. I hope I have those interviews on cassette instead of reel to reel. I'll check that box next.

I did find some stories from the 1970s and '80s that might be of interest and will be featured here on this blog in the future.

My wife and I are preparing for an evening of hiding as we no longer hand out candy in our 'hood due to the fact that people over the age of 21 come out to beg for treats. So we hole up in the den and keep all of the lights in the rest of the house off. Generally we have no problems.

I've got a stack of recent horror films to watch. I think I'll start on them now.

Good run of October posts, and it's been a pleasure to read 'em.

Not to sound disrespectful, but the Devil Doll looks like Michael Jackson.