Create your own video slideshow at animoto.com.

NEW YORK — The mood was mixed at the annual American International Toy Fair — one of the world's largest trade shows for the toy industry — conducted last week at the Javitts Center.

The sponsors of the trade show, Toy Industry Association Inc., released an analysis of the 2010 holiday shopping season by Sean McGowan, consumer leisure and lifestyle analyst of Needham & Company, LLC. He wrote in part, "I don't think that 2010 will go down as being a 'bad' year for toys, but I think it will be remembered for being no better than many other years. I would say retail toy sales will wind up being flat to slightly down for the year, which has pretty much been the standard for most of the past 10 years or so, with some exceptions (both positive and negative). Ironically, it may simply strengthen the notion that toy sales are relatively resistant to changes in the general economy — people don't spend much more on toys when times are good, and they don't spend much less when times are lean."

The irony about this year's Toy Fair is there were plenty of buyers walking the exhibit floor. New York City was not the center of a winter storm, which in past years has affected attendance.

Walking through the row of exhibits, one trend became clear: toy makers are still hesitant about investing in licensing. In a year that will see the last installment of the highly successful "Harry Potter" movie series, there were few toy tie-ins. While the upcoming "Green Lantern" movie may be getting a lot of attention, few manufacturers seemed willing to tie their profits to it.

Manufacturers seemed to stay with licenses that are considered evergreen: some Disney characters, Dr. Seuss and some superheroes.

Janlynn, primarily known for its line of crafts for both adults and children, has several lines of pillowcases that come imprinted with a design for children to color. Lonergan noted customers were buying the non-licensed kits over the Disney ones. The difference is in the pricing. He explained Janlynn must pay a fee to Disney for the use of the image and the non-licensed kits are less expensive.

He said the company would rather invest in their own brands and properties than those of another company.

Blocks away at the Hasbro show, the toy company's lineup reflected a similar philosophy. Although the company has licenses with Disney, Lucasfilm and Marvel Comics, the toy giant clearly has exercised caution with licensing. Hasbro is in the enviable position of companies seeking licenses from it for some of its established properties.

"Sesame Street" has been added to that short list of licenses this year.

Hasbro spokesperson Helen Van Tassel explained the company integrates many of its licenses into its existing toy properties. For example, its "Harry Potter" license is for a special version of its venerable board game, "Clue," in which the action takes place in Potter's world. Hasbro also has a version of "Operation," in which the long-suffering patient is now "Mater" from Pixar's "Cars."

Local companies at the show


Van Tassel said the sales for Hasbro's games division located in East Longmeadow were not outstanding, but the company hoped the new lineup of games and toys would do better this year.

Hasbro has long been positioning itself as an entertainment company with the development of animated television series and its successful "Transformers" movie series. Van Tassel said the company bought the Discovery Kids cable network to create their own television channel, "The Hub."

On the cable outlet, Hasbro has a variety of family programming, including game shows based on their classic board games.

"Transformers" is a huge franchise for the company, with the third "Transformer" feature film, "Transformers: Dark Side of the Moon," to be released this summer in 3-D. One of the toys Hasbro will be releasing is a "Transformers" mask with built-in 3-D glasses.

Hasbro is introducing a new construction aimed at the LEGO market, KRE-O, which will have 12 sets all with a "Transformer" theme.

Its "Sesame Street" lineup includes a toy that will appeal to the "Tickle Me Elmo" audience — "Let's Rock, Elmo." "Let's Rock Elmo" features an interactive, drum-playing Elmo that encourages a child to play along with it on a guitar and organ.

"Star Wars" fans can rejoice with the introduction of a highly-realistic light saber designed for play that will retail at $34.99.

Hasbro's "Jigazo" should appeal to fans of both puzzles and art. The Japanese import can take any digital photo and turn it into a portrait puzzle. The pieces can be used over and over.

If that wasn't cutting edge enough, the company will be releasing two versions of famous games in its new "Live" format. "Monopoly Live" and "Battleship Live" look at first like fairly conventional board games, except each have a computer with an infrared "eye" in the center of the board. This computer "sees" the position of the players' tokens and directs the play of the game.

Van Tassel said each version allows for immediate game play without the necessity of reading and learning any rules.

Another variant on a traditional favorite is "Scrabble Alphabet Scoop," designed for young readers. Scrabble tiles are placed in a "soup bowl" and players must use spoons to retrieve the letters they need to spell out words on their game card.

Keeping with the ongoing trend of emphasizing fitness, Hasbro will be performing a "bake over" on "Mr. and Mrs. Potato Head," the first redesign since 1983. The new model will be slimmer and trimmer.

At Janlynn, Lonergan said the company was receiving substantial orders on a new line of costume jewelry aimed at girls from ages 8 through 13. "Charmtastic" is a charm bracelet system that allows girls to build their own customized charm bracelet.

Sales have been significant this year and Lonergan said the company did more business on the first day of this year's trade show that it did during the last two annual shows.

The company was also seeing interest expressed in its "Make It Cool" brand of craft kits for children.

Joel Nulman of Fantazia Marketing of Chicopee didn't have the same perception of the show as Lonergan. His company sells a line of oversized plastic items from a three-foot tall box of crayons that serves as a bank to a two-foot tall baby bottle lamp.

His new item at the show is "Acrobat Man," a bucket of plastic figures that can be linked together like a construction toy.

Although he spoke well of the traffic at the show, Nulman said, "I think people are very cautious."

He said to describe the economy as still in recovery mode would be "an understatement."

The cool and crazy


Perhaps the most fun aspect of Toy Fair is simply finding new items that amaze, horrify or sometimes confound.

As someone who keeps a "Slinky" on his desk as a tension reliever, I have to admit "Nanodots" (www.thenanodots.com) is a welcome addition — as long as I don't let them near anything that can be affected by magnets. "Nanodots" are incredibly powerful, small magnets that can be placed in a wide variety of geometric shapes. Because of their size and the health hazard they can pose if swallowed, they are not a toy for kids; but for adults, playing with them can be quite addicting.

William Mark Corporation manufactures a variety of toys that fly and the company's latest drew quite a crowd at the show. "Air Swimmers" (www.airswimmers.com) are large helium balloon fish that fly through the air like a blimp, guided with a remote control.

"Skylanders Spyro's Adventure" (www.skylandersgame.com) is a video game that works with the Nintendo Wii system and features over 30 characters in toy form that can enter or exit a game when they are placed on a "portal" connected wirelessly through the Wii. The company believes the video adventures game genre will be changed by the concept of players using actual action figures. These figures remember alterations made to the virtual character.

Heroes in Action Toys have produced a group of action figures that merge popular presidents with classic movie monsters. Richard Nixon is the "Monster from the Watergate Lagoon," while Bill Clinton is a werewolf, John F. Kennedy is the "Phantom of the White House," Abraham Lincoln is the Frankenstein monster, George Bush is a zombie and Barack Obama is a vampire.

Perhaps more disturbing are the "Throttle Necks," (www.throttlenecks.com), plastic figures of Obama, Sarah Palin and Rep. Nancy Pelosi that a person can actually strangle and hear them gurgle.

At the Toy Fair, one frequently finds an independent who, against the odds, is finding recognition and making sales. Ernest Autumn Van Den Heuvel is one of those people. A heavy equipment operator, he has developed the "HandTrux" (www.handtruxtoys.com), a bright yellow plastic toy that fits over a child's arm and imitates the digging power of a backhoe.

Van Den Heuvel, an animated guy, said he had been making sales and attracting the attention of so many buyers, he had run out of business cards and sales literature.

"This is an outstanding red letter day," he said with a wide smile. 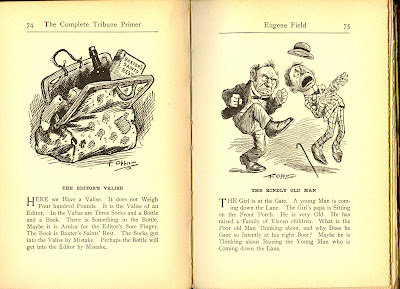 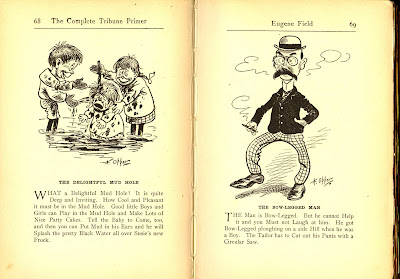 The pages reproduced above are from the 1901 book "The Complete Tribune Primer" by Eugene Field with drawings by Frederick Opper. I picked it up from a used book dealer because of the Opper cartoons.

Opper is one of the true pioneers of newspaper comic strips. He is known for his "Happy Hooligan" strip as well as " And her Name was Maude" – about an independent donkey – and "Alphonse and Gaston" – the eternally polite Frenchmen.

I really like his cartoony style and the illustrations in this book are a joy.

I had never heard much about Field, here is a complete bio of him but he is from the school of journalism in the 19th century that allowed people to be writers of both hard news and fiction, not unlike Ambrose Bierce, one of my literary heroes.

It should be noted that Field and his brother were raised after the death of his mother in Amherst.

Some of his "primers" still work today, such as "The Bottle." (capitalization is the author's)

"This is a Bottle. What is in the Bottler? Very bad Whiskey. It has been Sent to the Local Editor. He did not Buy it. If he had Bought it the Whiskey would have been Poorer than it is. Little Children, you Must never Drink Bad Whiskey."

Ain't that the truth!