Back in the days when I was editing the two animation magazines (Animato and Animation Planet) I tried to see every animated feature I possibly could.

My love of animation has not diminished, but my time that I can devote to it has decreased substantially.

On Friday, we took our 11-year-old goddaughter to a movie she requested to see, “Hop.” Now, my understanding wife told me I could be exempt from this expedition to a kid film that looked just awful to me.

Does anyone need yet another CGI animated, live action film with a hackneyed plot? The only advantage I could see to the thing was that it was NOT in 3-D.

We went to a suppertime show and the auditorium was filled with families with kids. It’s been a while since I went to a kid’s movie like this and I forgot the joy of listening to a movie over screaming babies and parents who were providing a commentary track for their kids.

Yeah, I can be a grumpy old man.

The film started and there was a moment that gave me a little hope. In the sequence depicting the many rabbits that served as Easter Bunnies through the years, there was one rabbit in armor on a horse with a lance. I want to believe that was a reference to Crusader Rabbit, the first animated series designed for television. 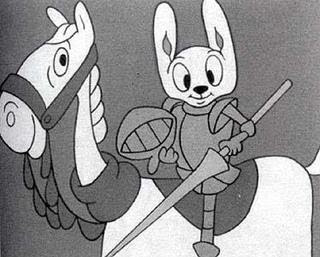 I had renewed hope this wouldn’t be too painful and I’m happy to say my blood sugar levels didn’t rise too much as the film unreeled.

This is one of those movies with a lot of talented performers in absolutely thankless roles that don’t allow them to do very much. Everyone needs to pay the bills, but Dennis Cole, Elizabeth Perkins and Kaley Cuoco were pretty much wasted.

The stars of the show were James Marsden on screen and Russell Brand, Hugh Laurie and Hank Azaria off screen providing the three key voices. Marsden’s character is a somewhat irritating loser, while Brand played the Easter Bunny’s son destined to take over his father’s (Laurie) job. The plot revolves around Marsden’s and Brand’s characters coming to grips with what they want to do in life.

I laughed five times in the film, which was five more times than I thought I would laugh. There was quite a product placement for Hershey/Cadbury chocolate in the film and I wondered for a while just how much I cost.

All in all, I can think of a lot of other kid’s movies that were far worse than this mostly benign film. And, most importantly our goddaughter liked it.

Here is the trailer.