I’m pretty excited about something that has been recently posted on-line: a beautiful print of the Fleischer Superman cartoon “Terror on the Midway.” Warner Brothers Online has posted beautifully restored prints of the Superman shorts.

This short, part of the legendary series of adaptations produced in the early 1940s by the Fleischer Brothers, has long been available on various public domain labels. The rights to these cartoons reverted back to DC Comics and, believe it or not, the person in charge of renewing copyrights at DC at the time at the time of the cartoon’s expiration neglected to do so.

The results of this action have been both good and bad: the good aspect has been the cartoons have been readily available, but the bad is that all too often the quality has been sub-standard.

Gone were the days when it was truly difficult to see these cartoons. Although I saw them on TV as a child, the first time I saw a number of them to study was in DC Comic’s office, watching the company’s own 16mm prints.

Even when various VHS and DVD collection boasted of superior prints, there was never a good print of “Terror on the Midway.”

The Superman series was the first comic book adaptation to film. Although comic strips had been the subject of both short subjects and feature films, the Fleischer Superman shorts broke ground.

They also broke ground at the studio with a radical departure from the kind of animation for which the Fleischers were well known and tried to change the perception of what kind of stories were suitable for animation. Although very popular with audiences, imagine if other adventure strips had been transformed into animation maintaining their signature look – “Flash Gordon” or “Captain Easy” or Terry and the Pirates.”

These are cartoons that are staged as a live action film would be staged. They effectively used pans of static drawings in order to put the animation budget into the action scenes. Fleischer head Animator Myron Waldman told me that animating the Superman shorts wasn’t easy. He said that additional drawings were added to give the characters a greater sense of weight.

The Fleischers were smart enough to use the vocal cast of the popular Superman radio show – starring Bud Collyer – that provided an additional thrill to Superman fans.

Let me quickly add that Superman wasn’t a project the Fleischers wanted. It resulted from a deal made between Paramount Pictures DC Comics after an effort to secure a serial version of Superman at Republic Pictures failed. The Fleischers knew to do the shorts in the manner that they should they would be more expensive than most cartoons – making it more difficult to recoup their production expenses and deliver a profit. Paramount basically forced the studio to undertake the assignment.

Republic, by the way, then turned to Captain Marvel and produced the live action film based on a comic book superhero.

The look of “Terror on the Midway” was unique to the series. On paper, it seems sort of mundane. Lois is saddled with the boring assignment of reviewing the circus. By accident, a monkey releases a huge gorilla from its cage, which sets off some terrifying circumstances.


I loved the use of shadow, the almost film noir feel, that is used to add drama and horror to this story. This cartoon is “lit” in a way audiences hadn’t seen before. I also admire the use of sound in this film from the ambient noise of the circus in the beginning to how the cartoon falls silent when the gorilla makes his appearance in the big top.

This is the Superman, by the way, who couldn’t fly, but took tremendous leaps. While he was bulletproof, he could be stunned by electricity. The fact that he was more vulnerable than the god-like character we know today. While there are no mad scientists or monsters, the gorilla is presented in such a way to maximize its brute strength and the problem he poses for Superman. In several scenes the viewer doesn’t see the gorilla in his entirety – just his torso, which emphasizes his unnatural size.

During the fight between Superman and Gigantic, there are two close-ups of the combatants that are presented in a way I hadn’t seen before in the series.

I appreciate whoever in the vast corporate hierarchy of Warner Brothers who decided to out these cartoons online.

Email ThisBlogThis!Share to TwitterShare to FacebookShare to Pinterest
Labels: Fleischer, Superman, Terror on the Midway 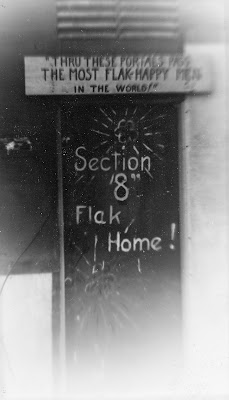 The door to the offices or barracks of my dad's squadron. 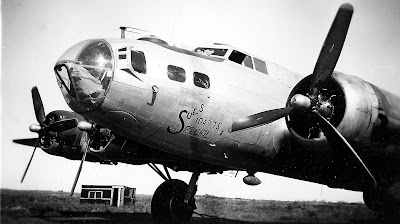 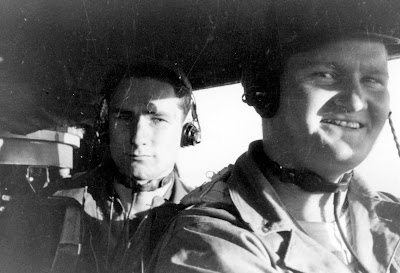 My dad, Gordon L. Dobbs (with hat on right) in the pilot's seat. I don;t know the name of the crew member.

My mother and father were keepers. Perhaps it was their experiences as children of the Great Depression, but both of them hung onto things.

Make no mistake, neither were pathological hoarders. They simply saw value in keeping objects and documents that many other people would have thrown away.

My brother and I saw a lot of that recently as I helped him close down my mom’s house, now that her health as forced her to move in with him. There were the standard objects –furniture, books, kitchenware – and then there are those items that instantly transport me to either a time earlier in my life or to a point in our parents’ lives that I only heard about.

My parents liked taking photos and there are several suitcases of family photos. My brother Patrick is a skilled photographer and so these photos interest each of us on several levels.

My father was an Air Force veteran of 26 years who piloted B-17s in WWII, B-29s in the Korean Wars and after, B-52s with nuclear payloads, until 1961 when an accident grounded him. He stayed in the Air Force on the maintenance side, serving in Vietnam as his last assignment.

Three wars in one life. I can't imagine the impact other than my dad was changed in some ways upon returning from Vietnam.

As a rule, He talked very little about any combat experience. We heard very few stories as kids. As he grew older, he would call members of his various crews and speak with them. The experience they went through linked them in a way that someone who had not been there couldn’t understand.

For years, he would read the "Air Force Times" to follow the careers of guys he knew and with whom he served.

About WWII, he did say you could never tell who was coming back and the B-17 crews were witnesses to seeing fellow squadron members shot down before their eyes. Occasionally there would be a colorful detail, such as how he chewed tobacco when he flew to help stay awake. I never asked him how he spat wearing an oxygen mask.

So the discovery of photos my brother and I never have seen helps us gain a tiny shred of additional insight about our dad. My brother found a large roll of unprinted negatives, which we believe are from the WWII period. He plans to scan those to see what they are.

My dad was pretty tolerant of my interest in films, but he had no interest in any war film. He didn’t want Patrick or me to watch them as he said they glorified war.

With combat vets you never know what trigger will cause a cascade of memories – negative or positive. My dad liked the television series “M.A.S.H.” but when McLean Stevenson’s character was killed on his flight home and out of the service, my father stormed from the room. He said something the effect, “That’s not funny. That kind of thing really happened.”

The following photos include combat photography taken in the skies over Europe by an unknown cameraman. Pat and I have made the assumption the reason my dad had these prints was because the photographer was either in his plane – Sue’s Special, named after my mom – or flying somewhere within my father’s squadron. 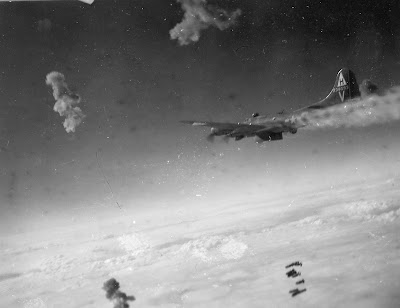 Those puffs of smoke are flak from German guns. This photo shows a B-17 that has been hit. 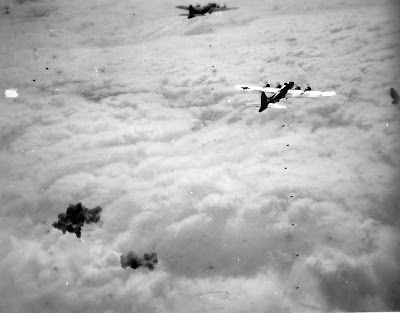 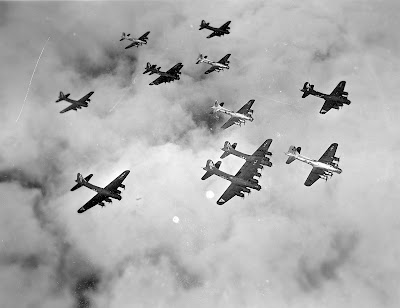 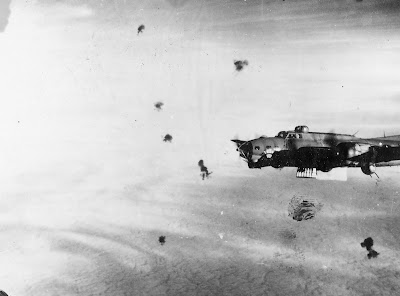