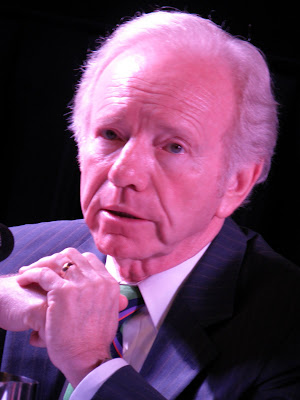 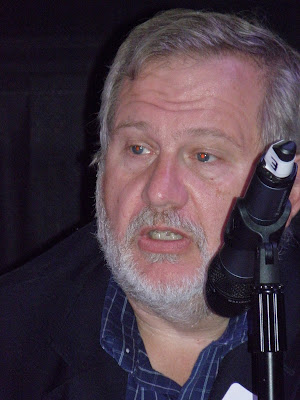 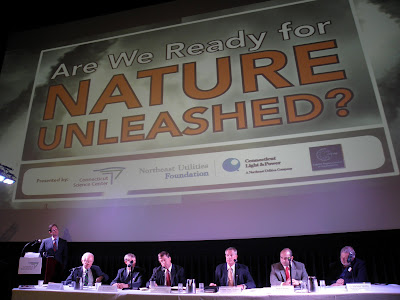 All photos by Patrick Dobbs


Ah, so close and yet so far away.

Last week I had the honor of being part of a panel discussion at the Connecticut Science Center in Hartford, Conn. – a truly impressive interactive science museum. The museum has a new exhibit called “Nature Unleashed: Inside Natural Disasters” and the discussion was on the theme “Are We Ready for Nature Unleashed?”

I was asked because the museum personnel wanted a survivor of the tornado in the group and had been steered to the stories I’ve written by a friend of mine. I joined a panel that included the state’s deputy commissioner of emergency services and public protection, a vice president of Connecticut Light and Power, a Federal Emergency Management Agency (FEMA) official and the chief operating officer for the Connecticut and Rhode Island American Red Cross.

The star of the show, though, was Sen. Joseph Lieberman.

I thought it would be interesting to ask Lieberman two things: does he really support the idea of cutting Social Security in order to strengthen a defense strategy against terrorists as reported and does he agree with what Mitt Romney proposed about eliminating FEMA and allowing states to respond to disasters without federal help.

I didn’t get the opportunity to pose either question and Lieberman framed his remarks around being prepared for national security threats rather than natural events.

He did ask the audience if they would contact their members of Congress to get entitlements under control.

He offered no message about tax reform or questioning whether or not the war in Afghanistan is worth the lives and money it is costing.

The discussion was a worthy one with all of us contributing to it, but the journalist in me was yearning to be allowed to talk.

I thought it was interesting that a week later we are hit by a huge hurricane. What's next? A plague of locusts?

Email ThisBlogThis!Share to TwitterShare to FacebookShare to Pinterest
Labels: lieberman

This has not been a good year so far and, in response to the stress, my wife and I have made plans for a number of little trips. This weekend with the boys was one of them and included no strips clubs and very little drinking! And only one seegar! We were good geezers.

Instead it was a mini-tour of some new England oddities, stuff that fascinates me! Here in still, movie and print is some of what we experienced. 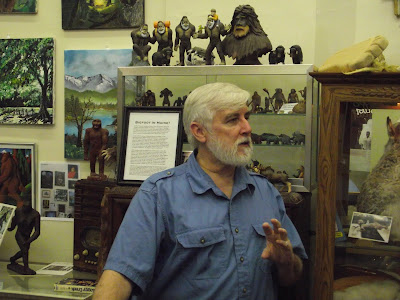 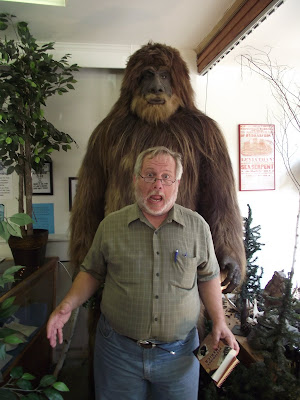 In top photo, author and researcher Loren Colen in his museum. In bottom photo, I meet Big Foot, or a reasonable facsimile. Both photos copyright by Joseph A. Citro and used by permission.

This is what I wrote about the museum. It was a pleasure to speak with Loren Coleman who is a hell of a nice guy, besides researching a topic that is a huge interest of mine.

PORTLAND, MAINE – It may take you a little more than a tank of gas to drive from Western Massachusetts to the International Museum of Cryptozoology and back, but if you are interested in topics such as Big Foot, lake monsters and unknown cats, among other creatures of controversy, the expense is well worth it.

The museum has the ultimate interactive feature: its founder Loren Coleman, a world-renowned expert on cryptozoology, is on hand most of the time to personally answer questions from visitors.

“Cryptozoology” is the study of hidden animals and the proponents of the research point out that such creatures as the giant squid, mountain gorilla and okapi were once thought of as mythical. Coleman has used the coelacanth, the living “fossil fish” long though extinct until a live specimen was caught in 1938, as the symbol of his museum.

Coleman is no wide-eyed fanatic with an aluminum foil hat. He has a graduate degree in psychiatric social work and worked in that field for years. He has written numerous books and has regularly appeared on such television shows as “In search of …” and “Monsterquest,” among many others.

Originally, the prolific author and researcher had the museum in his home, but the demand to see it was so great he decided to move it to its present location in 2009. In turn, the response has been great enough that Coleman will be moving it around the corner from its present location at 661 Congress St. to larger quarters.

The museum is an amazingly dense collection of artifacts that range from original plaster castings of Big Foot footprints to photos of lake monsters and unknown sea creatures to items depicting efforts to defraud the public such as the a reproduction of a Big Foot mask used in 2008 to earn a group of grifters money for the sale of a fake Big Foot carcass.

Where else could you see a sample of hair from a yeti?

There is an amazing undated photo of a group of Marines with a large unidentified sea creature that will leave you wondering just what it was. A digital frame displays a slide show of lake monster photos, including the famous photo of “Champ,” the lake monster of Lake Champlain.

Another digital screen runs a loop of the famous 1967 Patterson-Gimlin film of Big Foot striding through a California forest. Coleman dispute the more recent claims that the much-studied film was faked.

The recent report of a motorist in Connecticut killing a mountain lion – an animal long extinct from New England – is an example of a less exotic “cryptid.” Although there have been reports for years of people spotting mountain lions where they shouldn’t be, Coleman noted the official explanation was that this mountain lion shared DNA with big cats from South Dakota. Rather than say that mountain lions had returned to New England, wildlife officials claimed the animal had walked 1,500 miles.

Mountain lion generally have a range of 100 miles. To admit that mountain lions have returned would trigger their classification as an endangered species, Coleman said which could affect issues such as commercial development.

Coleman explained to Reminder Publications the museum attracts 5,000 visitors a year and that most are curious tourists who have heard about the attraction. About 30 percent are “cryptonuts,” while about 10 percent are skeptics who come to challenge Coleman.

That the museum has plenty of examples of attempted hoaxes is acknowledgment that Coleman applies great scrutiny to reports about unknown animals.

He also noted that just because a person’s cell phone has a camera doesn’t mean there would be more photos of Big Foot and big cats. Besides the fear and astonishment a sighting can inspire, it still takes time for a person to take a phone out of a pocket or purse.

For more information on International Museum of Cryptozoology, go here.

I was going to blog about Dave Sharpe. Go ahead, Google “Dave Sharpe stuntman.” He was frickin’ amazing.

But my hands have a mind of their own.

Lord, these politics is killing me. I just want to escape. Let’s watch a movie. Let’s go out to my favorite watering hole. Let’s smoke a seegar on the front stoop and talk trash.

I can’t convey the depths of my despair about the idiots who are bringing this country down the road to an even deeper depression.

I feel like I’m a broken record. I write in editorials and on Facebook that we need jobs. We need terms limits. We need to reverse the Supreme Court decision that allows corporations to be considered as “people.” Outlaw lobbyist who buy votes on behalf of their clients. We have to get out of the toxic trade agreements that are killing American manufacturing.

But instead too many people prattle on as if the rich are going to save the country. Don’t raise their taxes! They create jobs. No, they don’t. The companies they own create jobs – overseas so the rich can get even richer.

This country was built on entrepreneurs who got their hands dirty developing inventions, providing services or building something. The potential is still there, but the odds are longer and longer every day for success. It’s not government regulation. It’s the way the marketplace is controlled.

The middle class and working poor people who support the Tea Party and the Republicans think the rich will provide solutions. They might as well be sucking a gas pipe. Supporting these people will strip you of your ability for collective bargaining and tear away any sort of safety net.

Is there waste in government? Damn straight. Are both parties to blame? Absolutely. Have too many Democrats drunk that corporate Kool-Aid? I’m afraid so.

But the beauty part of all of these discussions is how the powers that be keep the groundlings bickering among themselves about stuff that scarcely matters.

Corporations with agendas own the national media and the whole left-right argument no longer applies. Corporations are essentially countries. The only political agenda is to gain power and money in the short term.

What can we do? More than what we are doing now. Pick an issue and become obsessive. Mine is keeping local. Want to build jobs? Buy local. Keep your money out of the hands of national chains as much as you can afford. We need to go back to growing as much food as we can locally and regionally. We need to look at our own area and see what is how potential for surviving on our own. We need to rebuild our economy locally as well as nationally.

We need kick the sumbitches out of office locally who aren’t being progressive, who cling to the old ways of graft and getting along.

Anyway, I need some relief. I’m not going to get it from Congress. The networks aren’t going to have the guts to tell the real story.

I’m going to watch a little Dave Sharpe. Damn, he was great in “Spy Smasher.