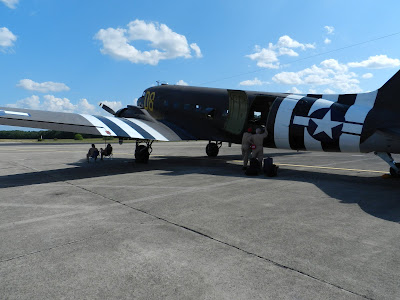 This C-47 transport plane was used in the invasion of Normandy on D-Day. 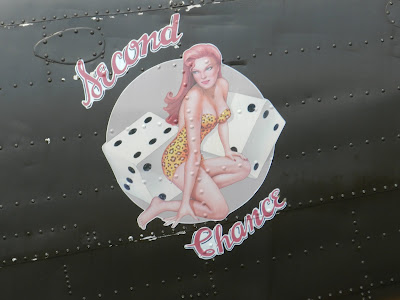 In the collection of the American Airpower Museum, it was given the nickname "Second Chance." 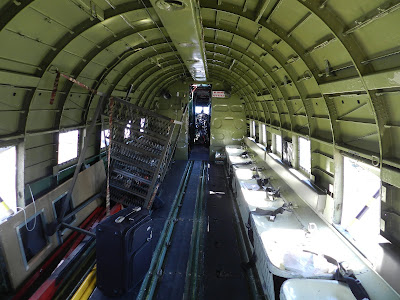 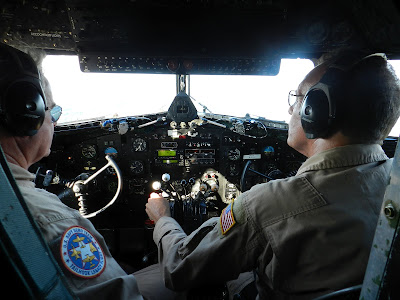 There's little room in the cockpit. 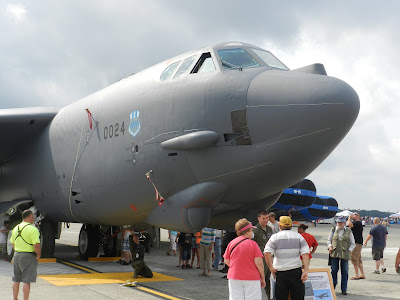 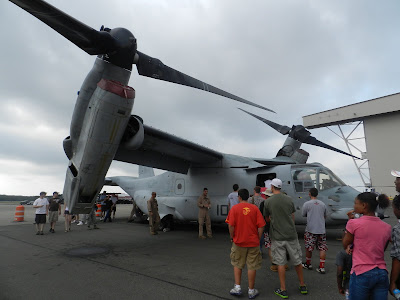 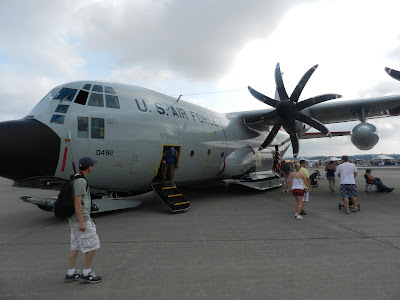 This modified Hercules cargo plane is iced for trips to the North and South Poles. Note the skis for landing. 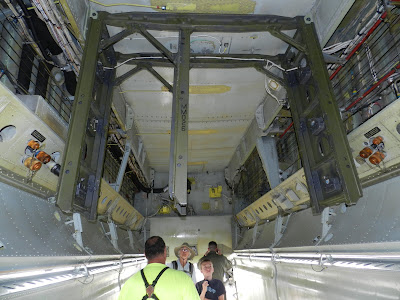 Once my dad received special permission to show us a B-52 up close. For years, it was almost classified. I remember standing looking up at the bomb bay and thinking it was huge. It's become a bit smaller with age. 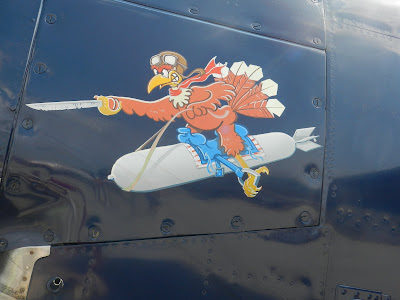 I love nose art, this one on a WWII vintage Avenger fighter. 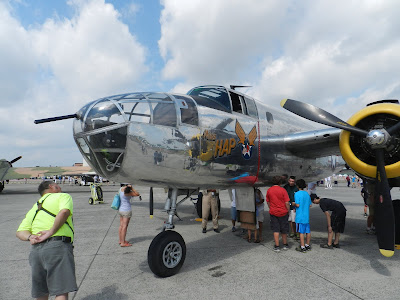 This is General Hap Arnold's personal B-25. 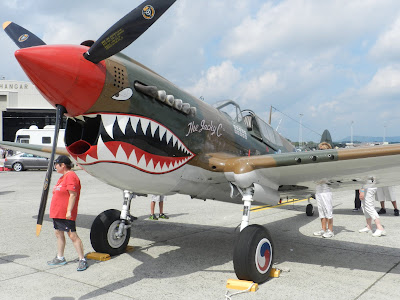 Is there anything cooler than the standard nose art of the Warhawk? 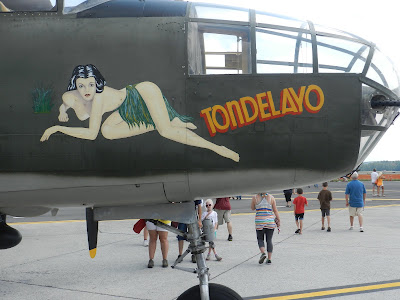 Well, maybe a half-naked woman on a B-25 is cooler!

There are some assignments I truly enjoy and covering the Great New England Airshow at Westover Air Reserve Base is one of them. My dad, Gordon L. Dobbs, was a career Air Force officer, who entered the Army Air Corps as an enlisted man, applied to flight school on a bet and commanded a B-17 in Europe. He flew B-29s in Korea and was a B-52 nuclear pilot when he had an accident that left one side of his body paralyzed in 1961.

He recovered and continued in his career on the maintenance side. His last assignment was commanding a unit Bien Hoa outside of Saigon keeping helicopters in the air.

Three wars in one life. He retired after Vietnam.

For me growing up on and near air bases was all a great adventure. One of my earliest memories is visiting my father through a chain link fence when he was on nuclear duty. The bomber crews that were on alert had to stay in an underground barracks called "The Mole Hole" at Westover. My mom would come a pre-arranged time and Dad would come out to see us.

One of the biggest treats in the world to me was when he would bring home a spare flight meal. I thought this was the most exotic food possible.

I have very few regrets in my life, but one is not going into the Air Force myself. After his Vietnam experience, my dad had every mixed feelings about how the military treated its men and women.

I have been privileged to have flown in two different B-17s – my father's favorite plane – and both times I was practically moved to tears. Both flights took place after my dad's death in 1996 and they seemed to offer a link to him that I hadn't had before.

To this day, if I hear a plane overhead I will stop and look at it. The roar of a jet engine is actually a reassuring sound to me.

The following is what I wrote for the newspapers I edit.

WESTOVER ARB – As we cruised over Western Massachusetts and toward the Quabbin Reservoir, it occurred to me that the sound of the engines of the C-47 was what the paratroopers heard as it carried them to the D-Day invasion – that is until the plane crossed the English Channel and into the Nazi fortified coast of France.

I was one of the lucky members of the media to be invited to fly in literally a piece of history on Aug. 2.

It was all part of the publicity for the Great New England Air Show at Westover Air Reserve Base. The first air show in four years, the event drew hundreds of thousand of people last weekend.

This year’s edition was different as it emphasized two themes: a salute to the veterans of World War II and the display of planes that had been stationed at the base, including the B-52 bomber.

The crowds walked a good part of the long length of the tarmac seeing a wide variety of aircraft, from a FedEx cargo jet to a LC 130 “Snow Bird,” a modified cargo plane with skis used by the New York Air National Guard for operations in the Arctic and Antarctica.

Many of the planes were open for visitors to go through them and to view the cockpits.

The C-47 was officially known as “The Skytrain” for its versatility in hauling people and cargo where it was needed, however it had another name, said affectionately during World War II, “The Gooney Bird.”

This particular C-47 brought British paratroopers to D-Day. It also played a role in the Israeli War of 1956 as part of the Israeli Air Force. It’s civilian counterpart, known as the DC-3, can still be seen in use, according to Ron Barris, a volunteer crew member from the American Airpower Museum in Farmingdale, N.Y., where this plane is part of the collection.

The C-47 also was known for its role in the ”Berlin Airlift,” which dropped food and supplies in 1948 and 1949 to the Allied occupied part of Berlin, Germany, to counter a blockade by the Soviet Union.

Barris said the first flight for this particular plane was in 1943.

The plane had just come out of its annual inspection and is in a Federal Aviation Administration approved maintenance program.

As we were taxiing for takeoff, Barris explained, how the paratroopers connected their ripcords to a static line so their parachutes would automatically deploy as they jumped out over their target.

He added the Germans dug eight-foot-deep trenches filled with water, so if a paratrooper landed in it, the weight of his 85-pound backpack would drown him.

The plane has been restored with the kind of seats used by the paratroopers. Barris added the soldiers would sit with their packs on to add some protection from flack and shells fired at the plane.

The plane carried no armaments and relied on protection from other aircraft.

Once aloft, we were allowed to move around. The only convention to modern air travel is there were signs instructing passengers not to smoke and to fasten their seatbelts.

A blistering hot day, Barris noted with a smile that there would be some cool air once the plane reached its cruising attitude and the pilot opened up his window.
The cockpit was just big enough for pilot John Vocell and Purdy. The only other crewmember sat in a tight area with the radio gear.

For Capt. Matthew Bates, who is stationed at Westover, the C-47 had a special significance. Looking at the plane, he said his grandfather, Andrew Bates, was the pilot of a glider filled with supplies and troops that was being pulled by a C-47. His grandfather, who is still alive, unavoidably crashed the glider into a hedgerow during the D-Day invasion and was seriously injured.

The take-off was delayed a bit as Vocell was bringing in another plane from the museum, General Henry “Hap” Arnold’s personal B-25. The B-25 bomber was best known for Gen. James Doolittle raid on Tokyo.

The museum also flew in other World War II vintage aircraft, including a P-51 Mustang, a P-47 Thunderbolt, A FG-1D Corsair, a TMB Avenger and a P-40 Warhawk.

Four of the fighter planes and the B-25 put on a show for the people lining the edge of the runway that included a simulated bombing run with coordinated explosions on the ground.

As thrilling as that seemed, it was the maneuver to open the flying show that silenced the crowd. To honor those World War II veterans who have passed on, three of the fighters flew low over the runway and then one broke way from the formation heading nearly straight up into the clouds.