My parents moved down to Virginia in 1987 following my brother and his wife who moved the year before. Virginina has never been appealing to Mary and me, but we've made dozens and dozens of visits over the years and I've visited Whitings Old Paper in an antique mall near Mechanicsville (on Route 301) probably every visit.

It's a great shop and I've found many thimgs over the years, including a four-sheet catalog from a non-theatrical rental company this last visit.

The reason it intrigued me so is the movies it offered were low-budget productions most of which I've never heard of and there is nothing mor einticing to a film fan that movies that are unknown to them.

I call it the "What's this thing?" condition.

Here is an example: 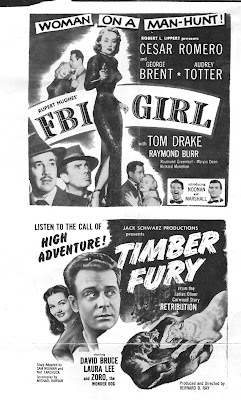 "FBI Girl" is available on DVD in a double feature from VCI Entertainment.

The other film, "Timber Fury," is also on DVD, but there are no youtube posts for either film.

Here are two others from the sales sheet: 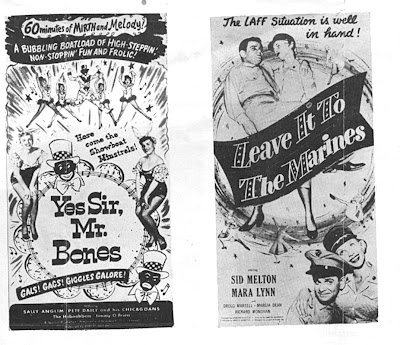 I've actually seen part of another minstrel movie years ago, but "Yes Sir Mr. Bones" beat it as a truly inexplicable cultural document. Shot in 1951, one realizes that racist humor was still very much of the mainstream American comic lexicon. Try to watch this clip – it's painful.

The other film seen here is a starring vehicle for one of the most active second or third bananas in ther 1950s and 60s: Sid Melton. Anyone who grew up in that era could see Sid in a variety of TV and film productions, but I bet this was one of the few times he got star billing.

I couldn't find a clip from this film, but I did find "Lost Continent," perhaps the "biggest" film offered by this company. In fact, you can experience this entire film right here: 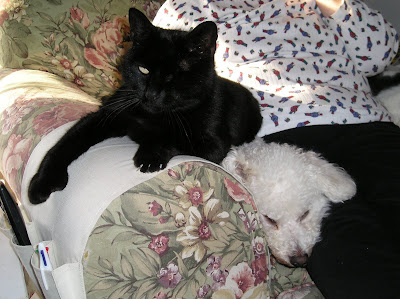 There are many ways to divide up the people in the world, but animal lovers and non-animal lovers is a significant division.

And I do not expect the non-animal lovers to understand or appreciate in some way the following post.

This is not some sort of criticism. Some people simply want animals to be part of their lives and others don’t.

My late father often said he would much rather be around animals than people. He sometimes noted that as a kid growing up in crushing poverty in rural Alabama during the Depression that the family dog was his best friend. Dad was anti-social, but that’s just how he felt. My mom remains an animal lover, although she no longer has any pets.

When we had the small family farm in Granby, we had plenty of animals, but the diary goats were clearly my mom’s favorites. They came into the milking area of the barn by name and were as loving and intelligent as a dog.

My mom could barely stand the day they had to sell the herd. She had to leave the house.

So I expect some readers to roll their eyes. That’s okay. We’re the crazy animal people.

One of our favorite pets was put down this week. Vincent – named for Vincent Price – was a jet black short haired male cat wit the most intimidating set of double paws I’d ever seen.

Despite Vincent’s appearance – he had a swagger that indicated he would stand for no foolishness – he was a sweetheart.

Vincent lived with us for 16 years. He started life as a stray – a feral kitty born of a mother cat we fed on our porch. This cat – which eventually died – was somewhat friendly, but Vincent as a kitten was not. He was as wild as he could be.

When winter came we were fearful for his safety, but Vincent made a decision. One cold day, he simply ran into the house and was instantly part of the family.

It amazed us that he could turn off one set of behaviors and turn on another, but that’s what he did.

He was a favorite of our friends and got along fine with the dogs in the house. He would frequently want to help me write, by lying down in the space between the computer and the monitor.

Unlike some of the other cats, he enjoyed being held and we could carry him around cradled in our arms like a baby.

To wake us up, he would gently but firmly bite a selected finger.

He had a problem with one eye, which necessitated its removal. He was not even more intimidating with just one eye. I wanted to get a small watch patch for him, but that suggestion was vetoed.

Although he no longer had the advantage of third dimensional sight, he caught a bird right after coming home from the vet’s.

In his later years, he developed the habit of sitting with us when we were watching a movie or television. He liked to sit very specifically – close to us on a side that would prevent the dog from being close to us. He tolerated Lucky the Wonder Bichon – just tolerated.

In the last few weeks, his health broke and we were forced to put him down. He’s buried in a flowerbed in the back yard.

What is amazing about pets is they want to express affection and they look for affection. They don’t judge. They don’t discriminate. It is a cliché to say we could learn a lot from them, but it is the truth.

Like all of the cats we have Vincent was a rescue. I think he had a good life and I know he enriched ours.
Posted by Mike Dobbs at 12:57 PM 4 comments: