Who would you vote for?

Now remember, this is the candidate for the U.S. Senate in Delware who was unaware of the Constitutional protection of the freedom of religion and expressed her ignorance in a debate at a law school.

For more on her check this out

And this is the woman who has set fanboys' hearts on for for over 30 years.

I love how Halloween and the elections have collided a bit in Deleware.
Posted by Mike Dobbs at 5:17 AM 1 comment: 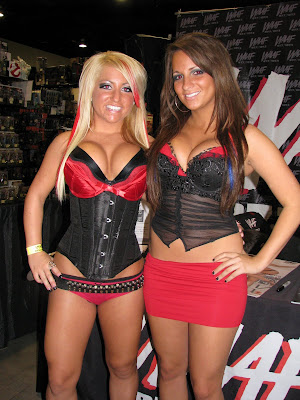 A Rock and Shock addition:

How could I forget this photo? This is one huge difference in the conventions of my youth and now: women. There weren't any women at comic book conventionsor movie convnetions when I was in college. Not even women at booths hawking stuff.

These two ladies were among the models for the new Mantown Calendar from WAAF. I bought one. It's for charity. I'm giving it to my brother-in-law. Oh never mind!
Posted by Mike Dobbs at 7:18 PM No comments: 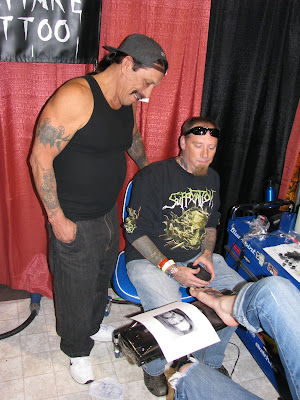 Actor Danny Trejo admired the work of Westfield, Mass.-based artist Jamie Cross who was tattooing Trejo’s portrait on the foot of a customer.Contact Cross here.

Rock and Shock 2010 or am I too old for this stuff anymore?

So, Mark, Marty and I once again had a table at Rock and Shock and we all made varying amounts of cash. Whether we go again next year is a question, as the rates will probably increase to the point that profitability will be difficult to make.

I’ve been going to conventions of one sort or another – my first was a Boskone science fiction show when I was in high school – and generally they have been positive experiences. For a teen growing up in Granby, Mass. it was always reassuring there were other people who were into the same odd stuff – comics, movies, horror, fantasy – that I was.

It was a lot tougher to be a fan of such things back then. I think I started a fanzine, just to communicate to other like-minded folks.

Attending UMass confirmed there were fanboys and a few fangirls like me, but traveling to conventions in New York City or Boston was especially rewarding to me.

I like Rock and Shock a lot. It’s close to home. It’s organized well by someone who gets it and the dealers’ area is laid out to accommodate crowds.

The DCU center in Worcester, though, is a poorly run facility that didn’t keep the restrooms clean, harassed dealers about outside food and hadn’t properly cleaned up the exhibition hall from the mess the circus animals made. I don’t blame the Rock and Shock management as they were contesting the DCU people over these issues.

Rock and Shock is a young fans’ show. The kids who attend probably barely know who Christopher Lee and Peter Cushing was, much less Karloff and Lugosi.

However if you have something to sell that they can relate to, you can do all right.

At age 56, though, much of the magic of attending a convention, even behind a dealer’s table, has been lost. The best part of the weekend in many ways was simply hanging with two friends.

My buddy Jeff Allard has a great post about his feelings. Check it out here.

A large part of it for me revolves around interactions with guests. I have fond memories of simply talking with people. I didn’t have to buy an autograph and, in fact, they were happy to autograph whatever you had.

That’s not the case any more and hasn’t been for a long time.

I remember at a Chiller Con years ago, Mark Godard, the second male lead of “Lost in Space,” yelling at a fan who had shot some video of him while he sat at his dealer’s table. Now, if he had paid him, I bet it would have been okay.

This show I was asked by my buddy Steve Bissette if I could fact-check something with legendary director George Romero. So, I stood in line. There was a sign alerting me to all the things he was selling and the various costs. I reached the head of the line and had to clear what I wanted to do with one of his assistants – a humorless guy who was pretty unfriendly. I told him I wanted to ask Romero a question. I read it off my iPhone from Steve’s email and as I did another handler came into the areas and was clearly aghast. He asked the first guy what was I doing, what was the question and clearly got worked up about it.

Romero seemed fine answering it. He clearly was used to a more standard interaction – greeting, autograph, photo – but I had no issues with him. Now, with the other two morons, I did.

I was going to try to stake out some interview time with Danny Trejo, but next to Romero he was the most popular and, while he was clearly nice to the fans who ponied up a minimum of $30 for a signature, there was no time for idle chitchat.

Perhaps my time at conventions has come and gone. Or perhaps I need to attend one that has a greater emphasis on older films.

Here are some photos: 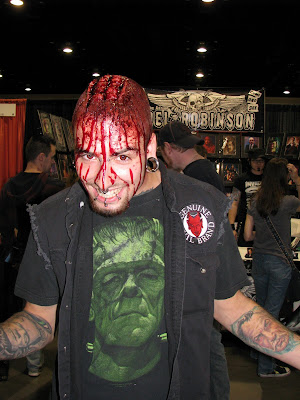 This guy was going around going around the show trying to get people to go to make-up artist Cherie Verie to get some custom work done. Contact her here. 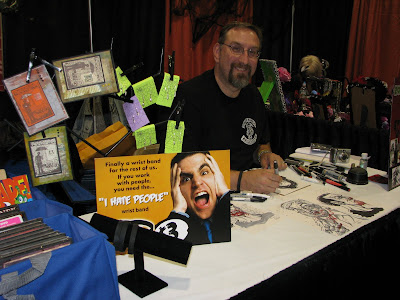 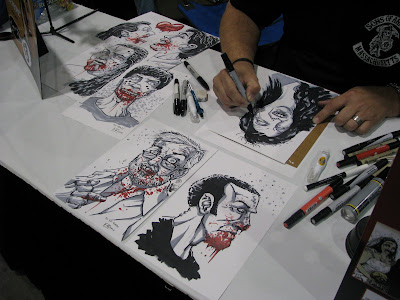 Mark at our table. He was busy zombie-fying folks. 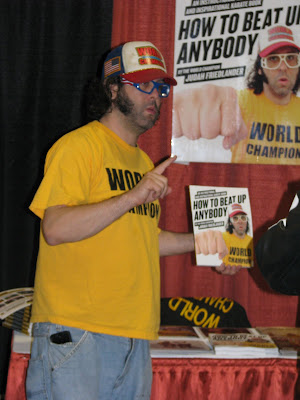 Actor and comic Judah Friedlander was hawking his book “How to Beat Up Anybody” at the show. 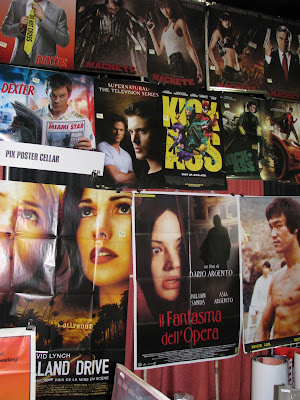 Posters, posters and more posters: I sold four from my collection – one very reluctantly. I bought none. 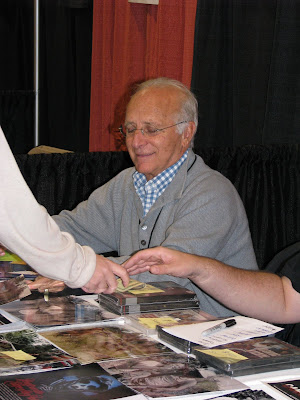 Director of a film I will never watch Ruggerio Deodata, the man behind “Cannibal Holocaust.” 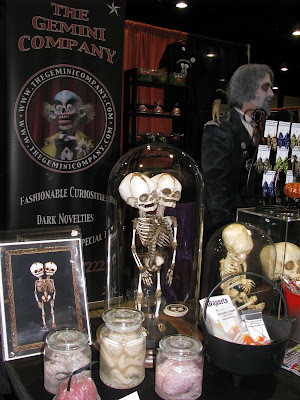 There are always critics out there.

So I get an e-mail from the folks at the Historic Journal of Massachusetts that they reviewed my Springfield postcard history book. I'm addressed as "Dr." in the e-mail.

So here's what was published or about to be published:

Arcadia Publishing is known for its extensive line of local history photography publications. Springfield is part of the Postcard History Series, which focuses exclusively on old postcards. A brief introductory essay outlines some of the high points of Springfield’s history, from the founding of the settlement by William Pynchon to the present day. Numerous famous residents are also briefly profiled, including Springfield’s most famous son, Theodore Geisel, and one of her most infamous, Timothy Leary.

The bulk of the book consists of 180 postcards. Many of the postcards feature the landmarks of Springfield, such as Forest Park, Court Square and other important municipal buildings. Others focus on important businesses, such as the Smith and
Wesson plant, the Springfield Armory and the Indian Motorcycle factory. Like the Images of America series, each postcard is accompanied by a short caption.

The captions, while informative, are too short to add up to anything of substance. There is no attempt at interpretation or placing the postcards into any sort of historical context. While current or former area residents (myself included) will enjoy seeing familiar buildings, some gone, others not, without any kind of contextual support, Springfield is little more than a collection of old postcards. This is particularly unfortunate because some of Springfield’s best history is left out as a result.

An excellent example is the postcard featuring the Bosch Magneto Company. Bosch was a well-known and long-time employer in the city. Opened in 1910, it was in operation until 1986, when the plant’s operations were moved to another state. The building itself, situated along the border of Springfield and Chicopee, was destroyed by arson in 2004. This information, all from the caption, is somewhat interesting, but the reader would be better served by being told the real story behind the Bosch plant. Originally owned and operated by a German family, the factory was seized by the federal government twice, during both the First and Second World Wars. After World War I, the original owners were allowed to repurchase the business, but the government refused to permit this after the second, and ownership passed to a new company that remained in control until the plant’s closure.

This amount of information is difficult, if not impossible, to get into a caption for a postcard. But it isn’t in the book anywhere. The logical place would be the introduction, but upon closer examination, the introduction reads like an extended version of the captions, and repeats a good deal of information that can be found there. The Bosch postcard is not the only example, but it is one of the most striking.

Many questions go unanswered. What are the origins of the postcards themselves? Postcards featuring the beautiful architecture and monuments of the city make sense. Springfield was once a popular tourist destination, one of the gateways to the Berkshires. Postcards to sell to that market would be expected to appear. But who thought a postcard of the Bosch factory would be popular, or Monsanto, a chemical factory? Why was it produced, and by whom? A large number of the postcards appear courtesy of their owners. Why did these individuals keep these postcards? What was their connection or interest to the subjects of them?

Local history buffs will no doubt enjoy Springfield, or any of the other similar books that Arcadia Publishing churns out yearly. As a local history buff, the reviewer found the postcards interesting, especially when one spots a house or building that still exists today. But without that local connection, this book is the equivalent of a neighbor’s vacation slide show. It is pretty and interesting, but it lacks meaning.

Micah Schneider is a master’s candidate in history at the University of Massachusetts, Amherst.

I had to respond and did so thusly:

I am delighted to first be referred to as a "Dr." when I'm not one and to have a review of my book that COMPLETELY misses the point. The Arcadia books are strictly formatted by the publisher. They tell you EXACTLY how many words to be used in the caption.They tell you exactly how long the introduction should be.

But of course the authors – such as myself – is seen by this academic as some sort of boob historian who can't adequately present his story. Thanks so much.

"It is pretty and interesting but lacks meaning" – did the reviewer actually read my introduction? I actually set up the context to explain how this city came about, why it is significant, why it is still significant within the format given to me by the publisher.

The reviewer wonders why people used postcards and why people collect them today? Did I have to explained the history of cheap postal communication and the thrills of collecting little pieces of history?

I guess the reviewer missed there are two very interesting facts brought up by this book that have seldom been brought up before: the location of the tavern visited by Washington and the movement of the former library onto the Quadrangle.

You want a history of American Bosch? Within the context of a postcard history book?

I emphasized that this book was a mere introduction to the history of the city. I referenced other more in-depth works on Springfield's history.

Here's a novel idea: instead of taking pot shots from your ivy-covered towers on Western Avenue, how about actually interviewing authors to obtain an understanding of how a book is created and what is its intent.

P.S. At least you gave me fodder for my blog and Facebook.
Posted by Mike Dobbs at 5:44 PM No comments: