Here are some Karloff stills from my collection. What I liked about Karloff (and Price and Cushing) is they were actors who could be the lead in a film or take on a character role with equal grace.

Karloff was essentially a character actor before he hit it big with "Frankenstein" in 1931. Although he was busy through the 1920s, he was always a supporting player who drove a trucks between jobs to support himself. He was in his forties when fame and success came to him.

Here's a clip from "Smart Money" in 1931 with Karloff the character actor in a scene with Edward G. Robinson and James Cagney. 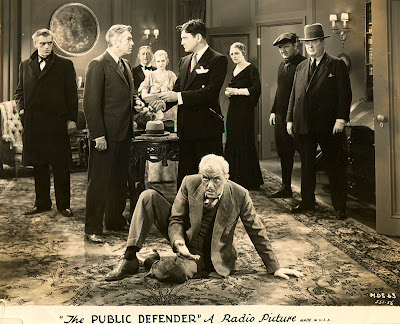 "The Public Defender" was a 1931 crime drama with Karloff playing the role of "the Professor." There's Boris on the far left of the scene. If you want to see Karloff in one of his best supporting roles from the early 1930s, check out "Five Star Final," one of my favorite newspaper dramas, the next time it's on TCM. 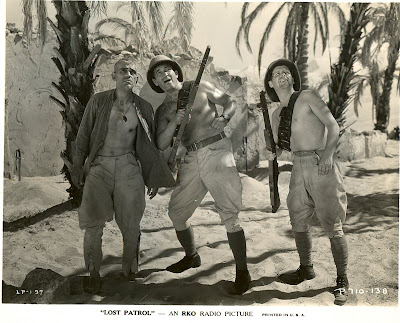 Although director John Ford became primarily known as a Western director, he was in the 1920s and 1930s simply a director with experience in a variety of dramas. "The Lost Patrol" (1934) was a good one with Boris as Sanders, a British soldier, who under the stress of being lost in the desert. allows his religious fanaticism to take hold of his common sense. That's Victor McLaglen and Wallace Ford with Karloff. 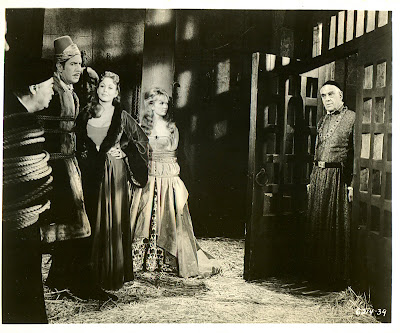 "The Raven" (1963) isn't as funny a horror comedy as "The Comedy of Terrors." It's pretty silly, but it does give viewers the chance of seeing Karloff with Price and Peter Lorre sending themselves up a bit.

One of my favorite Karloff films is Bedlam...Split Him In Two!!!