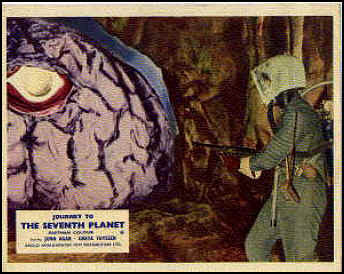 So I thought I would issue myself a little blogging challenge and post something horror related every day during the month of October.

I came to horror films rather late in life – junior high school. As a kid my earliest horror film memory is watching the Ray Harryhausen film “The Beast from 20,000 Fathoms” on television and I liked it.

My dad was stationed at Maxfield Field in Montgomery, Alabama in 1962. I was in the third grade. There was a movie theater close by with kiddie shows on Saturday. My parents would drop my brother and I off and I remember seeing cowboy movies and a Hercules epic of some sort.

Amazingly, this theater was running the first “Batman” serial 20 years after is release and I was enthralled. It stunned me that Batman had been made into a movie.

Well, one day, my parents dropped us off and my brother and I paid our admission and went into the auditorium. The first show hadn’t stopped as yet and the film was the inane “Journey to the Seventh Planet.” The plot revolved around astronauts seeing loved ones as they explored the planet and it turns out it’s simply mind games played by a giant brain living in a cave with a huge eyeball in the middle of its, well, brain.

We walked into a scene in which the brain monster dominated the screen. I was petrified with fear. Taking my brother’s hand I walked out. I tried calling my folks but they were shopping. We waited outside the theater for two hours.

I caught hell for this decision and didn’t see another movie in a theater until 1965.

After that whenever anything vaguely horrific came on television, I freaked out.

All of this came to a head of sorts when I was in junior high. I liked movies. I watched a lot of them from 1965 to 1967 when we were stationed on Okinawa. Kadena Air Force Base had two theaters and Fort Buckner, the big Army installation, had a huge theater. Movies would play at Buckner first and then go to the Kadena theaters. I watched some films twice that way.

The only “horror” film during this time was “The Ghost in the Invisible Bikini.” To this day it astounds me my parents brought me to that thing. Sorry Mom! Sorry Dad!

So jump ahead a few years to 1967-68 and I was a fetal film fan by junior high school in Granby, Mass. I suppose since horror was a forbidden fruit that I gravitated toward that.

We had three TV stations in those pre-cable days and old movies were still a staple for local programmers in those days. I started watching whatever I could and was interested that a guy like Boris Karloff appeared in non-horror films. This revelation got me watching other types of movies and my interest grew.

I read “Horror!” by Drake Douglas and Carlos Claren’s “An Illustrated History of the Horror Film.” I bought “Famous Monsters of Filmland,” Castle of Frankenstein” and “Larry Ivie’s Monsters and Heroes” as often as I could afford them or find them.
Being a film/comics geek in those days was hard, frequently solitary, work.

I began publishing “Inertron,” a fanzine, in my junior year of high school.

I have to say my interest in writing came directly from my wanting to communicate about these films I saw with other fans.

The first celebrity I interviewed was Buster Crabbe and the piece ran in my ‘zine.

I was down a path I’m still on today.

By the way, I’ve since seen the movie with the giant brain, thanks to my friend Steve Bissette. It’s truly lame. Boy, was I a dumb kid.