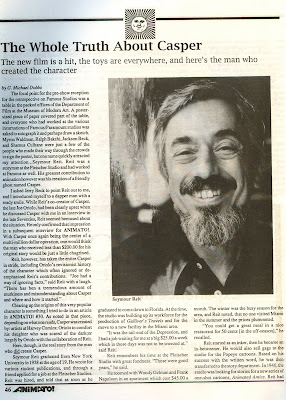 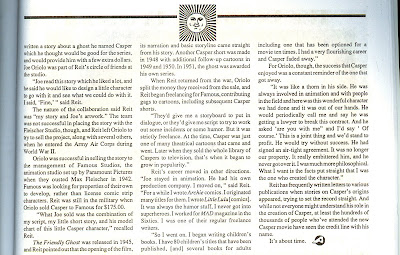 A reminder: Our blogger is attempting to post every day in October something about horror in films and popular culture.

Back in the mid 1990s when I co-owned and edited "Animato! The Animation Fan's Magazine," I wrote about Fleischer Studio alumni Joe Oriolo who made a name for himself in the 1960s when he secured the rights to Felix the Cat and produced the popular cartoon series for television. He also made a series that I watched as a kid and pretty much hated, "The Mighty Hercules."

I can still sing part of the Hercules theme song from memory though.

By the way, the Oriolo family still has the rights to Felix.

When I interviewed him in the 1970s, Joe pretty much took credit for the creation of the most enduring "horror" figure in animation, Casper the Friendly Ghost. He mentioned writer Seymour Reit, but only as a collaborator.

Well, Reit was the creator of Casper and he brought the error to my attention. I interviewed him in New York over lunch at a very nice restaurant and he insisted on picking up the tab. He was a charming guy who was amazingly philosophical about having sold off his rights to the character for only $200. I was happy to write a follow-up story.

Click on the two photos and read his story. It's a cautionary tale about creators and their creations.

And here's a Casper short – co-driected by my friend Myron Waldman.