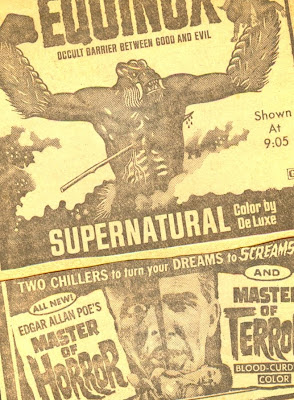 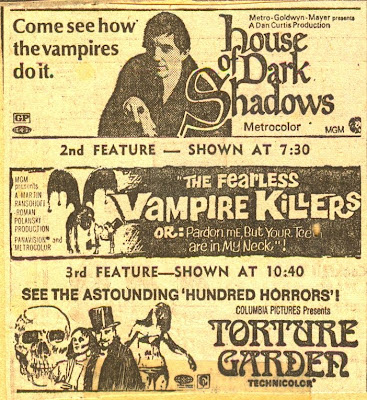 Drive in memories I never had

When I was first in love with horror films, I naturally wanted to see them. The difficulty was, until I could drive, getting my parents to take me to some triple feature was out of the question.

They had taken us to drive-ins when my brother and I were kids. The routine included taking a bath, getting into our pjs and having the back seat of the car – probably the 1955 Buick that was as big as a studio apartment – made up as bed. I distinctly rember my father wanting to cut out of George Pal's production of "Tom Thumb" as soon as he thought we were asleep.

I wasn't, just yet and heard him.

In high school I was so fascinated by these drive-in films, I actually started a scrapbook of ads and other clippings. I would look at some of these ads and wonder "just what the hell is is movie, anyway?"

The odd little low budget things looked so, well, exotic: "The Vengeance of She" with a buxom blonde snapping a whip; "War of the Gargantuas" – just what were those monsters anyway?; "Green Slime" with the dumbest looking monster ever; and "Guess what happend to Count Dracula?" with co-feature "Phantom Fiend."

Would I ever see any of these?

I did go see the second "Dark Shadows" movie at a drive-in to please my younger brother but I know we didn't stay out all night.

Being a farm boy and having to get up and do things precluded enjoying the dawn to dusk show.

When I was in college, my girlfriend's father would have slit my throat or whipped me – he actually had a bullwhip – if I had brought her to a drive-in. She was very nice, but wasn't at all interested in horror films. I went to plenty of movies, but if they were horror, she didn't come.

Well, now decades later I can enjoy these films on DVD. And guess what "Guess What Happened to Count Dracula?" from Something Weird Video. The only trouble is that stress and fatigue prevents me from staying up all night for that triple feature.