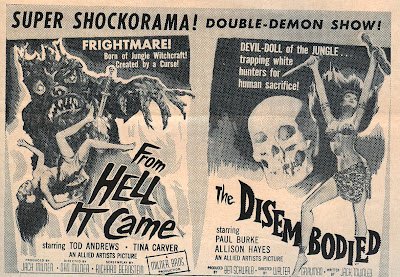 And that's the reason I love the goofiness of "From Hell it Came," a spectacularly cheesy 1957 Milner Brothers production, which is now available on DVD through Amazon and the Warner Brothers Archive Collection

Tobonga the tree monster itself, crafted by the amazing Paul Blaisdell – the man whose low budget monster populated films from American International Pictures in the late 1950s – is a great monster. Here's a guy who was asked to make a tree monster which could walk and he pulled it off with style.

Here's a favorite image from the film as the heroine attempts to figure out what animates the tree monster. I love the use of stethoscope, which poses the question of whether or not tree monsters have a heart? 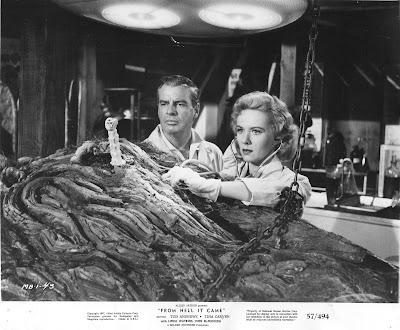 Below is a rare image Bissette and I found in the crates of odd stills we used to go through at Cinefest in Syracuse. The scene is from the film "Arson for Hire" and the star of the film, Steve Brodie, is one the ground taking care of Jason Thomas. Look who's hanging around witnessing the slam bang action? 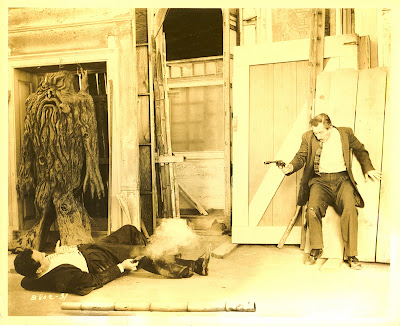 The plot from from Imdb: "Johnny Broderick, arson squad investigator, and his assistant, Ben Howard, investigate a warehouse fire and find evidence of arson. Lawyer William Yarbo is behind the series of incendiary fires that have been plaguing the city. Keely Harris, an actress, inherited the warehouse from her father. Yabro calls on her and says that he and her father had heavily insured the building and planned to burn it and collect, and also tells her she must accept half of the insurance money or he will see that she is blamed for the arson. "Pop" Bergen, the father of Marily Bergen, is the torch man hired by Yarbo, and he perishes in one of the conflagrations. Yarbo learns that Keely is cooperating with Broderick and he enters the movie studio where she is working, determined to kill her. Written by Les Adams"

I wonder where that costume went. Perhaps one day it will turn up at a tag sale or on eBay!

I'm going to have to borrow this wonderful walking tree movie.