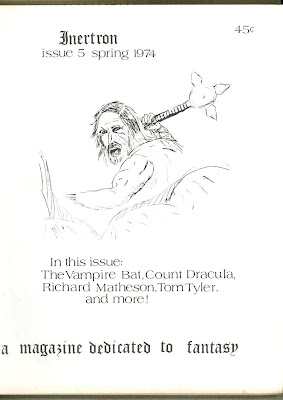 You never know what's going to pop up on ebay, right?

(I've tried to add the link to the auction page, but blogspot doesn't seem to allow it!)

In high school and college I was bit by the fanzine bug and produced five or six editions of "Inertron," named for the element in the original 'Buck Rogers" strip that powered an anti-gravity rocket-pack device.

My father, who was teaching at the time, owned his own spirit duplicator machine and I used that as my printing press, going to outside offset printers for covers and photo pages. Eventually it was all offset printed.

I never made a dime off it as my costs always exceeded my revenues and my print runs were around 100 or so back in the period of 1971 to 1976. My last fanzine effort was a four-pager that I sent out to my subscribers in 1976.

I loved it. I loved working with contributors. The joy of holding a finished edition in your hands was incredible. I didn't care that what I did was something that no one else in my peer group would even think of doing – aside from a handful of people at the UMass Science Fiction Club, fellow geeks and fanboys and girls before those terms were used.

I still take so much satisfaction in getting something in print. I'm still a geek! When I was publishing the animation magazines, I took great pride in walking into bookstores and seeing it on a rack. I still get those feelings for the newspapers I edit, even though I don't own them. I'm just a hired hand.

Damn -- I was bidding on that (still am) and was going to give it to you for your birthday!

This 99 cent fanzine is going to go for big bucks.