Don't you love mug shots? Why is this guy smiling? Oh, he must be drunk, still!

This came to me the other day from Sgt. John Delaney of the Springfield Police Force:

"At 1:15 A.M. this date officers Kim Brantley and Jose Diaz were on patrol in the area of 759 White Street when they came across an accident. The officers observed a white male standing next to his black pick-up that was just driven through a fence at that address. The officers then observed two parked cars in front of the address that had been smashed into. The officers questioned the driver and he wasn't responding very well because of all the Budweiser he had just consumed. There were empty beer cans all over the inside of his truck and frosty one that was half gone in the cup holder. The driver also admitted to having three white wines. He was placed under arrest for Driving While Intoxicated. Arrested was:
1) James O. Lord age 34 of 32 Bradford Street, Provincetown MA, charges;
a) Operating Under the Influence (second offense)" 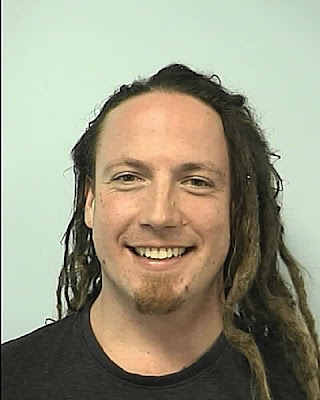 Here's the damage to the fence. 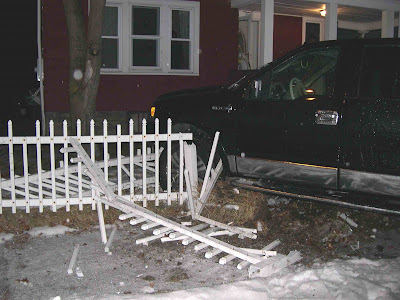 Here's am even better one that came in before Christmas that I meant to post oveer the holidays:

"At 3:05 A.M. this morning Officers David Ramos and Selenia Cruz were dispatched to 418 Liberty Street for a large disturbance at a house party. The officers arrived and found 21 year old Jonathan Robinson of Springfield lying in the middle of Liberty Street suffering from stab wounds to his left side and the left side of his head. The victim received deep stab wounds and was losing a lot of blood. While he was lying in the street he was able to look up at a woman standing in front of 418 Liberty Street. He was able to point to this female and exclaim, "That is the person who stabbed me". The woman then entered the home while the officers provided first aid. The ambulance arrived and quickly brought Robinson to the Baystate Medical Center E.R. The victim is in 'serious but stable condition' and the wounds are not life threatening. The female then re-appeared and the officers arrested her for the assault. She fought with the police and was abusive in her remarks to the officers. The arresting officers had to use pepper spray to get her under control. They recovered a large kitchen knife. The officers observed blood all over the walls in the hallway. The fight started because Robinson made remarks as he was leaving. he commented on the weight and the sexual orientation of the female. She took offense to the remarks and grabbed a kitchen knife and stabbed Robinson in the side and the head as he was leaving.
Arrested was:
1) Christina Brown age 24 of 418 Liberty Street Springfield, charges;
a) A&B Dangerous Weapon (Knife)
b) Resisting Arrest
c) Possession of Electric Stun Gun...(officer found this weapon in her house)" 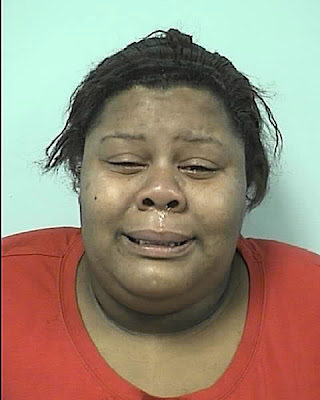 There's no crying while you're having your photo taken!

That crying woman pic made me LOL! What a GREAT pic!!!

Everyone loves the second one, especially once you read the report. So she stabs a guy who called her fat and a lesbian and then she cries once arrested!

And pepper sprayed! Would have been interesting if she got her hands on her stun gun.