Here's a couple of clippings from the Springfield Union – the morning daily paper before The Morning Union and the Union-News and now The Republican – showing a bit of the night life in Springfield circa 1937. 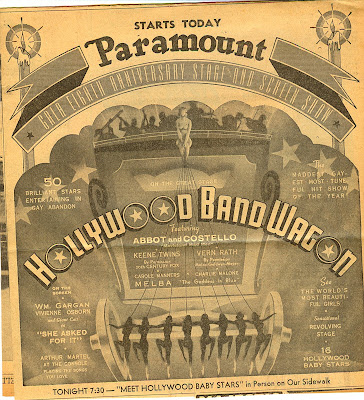 The "Hollywood Band Wagon" show at the Paramount – now the Hippodrome night club – was a live how starring Abbott – they left off a "t" – and Costello. At this point in their careers they had been burlesque and vaudeville stars, but hadn't yet made the splash on radio that would help propel them to national prominence. They were still a couple of years away from making their film debut. 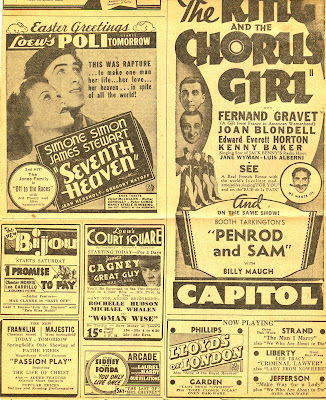 Lord, just look at the number of movie theaters that was in this area! The Capitol was next to City Hall where the bank building is now standing.

The Poli was on Main Street and The Court Square theater was on Elm Street. Note the movie at the Court Square; Jimmy Cagney in "Great Guy." Cagney was in a contract battle at Warner Brothers and had stayed off screen for about a year. he made this film at First National, a small indie that was trying to improve its status. Cageny kissed and made up with WB and First National eventually withered away.

Double features, what a concept! Look at them all! When "Grindhouse" was released as a faux double feature, at the showing I attended people walked out after the first half because they didn't understand another film was coming.