I had the pleasure of being on Bill Dwight's talk show on WHMP (1600 AM in the Springfield area, 1400 AM in Hampshire County) in my role as a journalist/ wise guy on Tuesday.

Bill has the distinction of being the only person in this market to have a local radio talk show that isn't part of a morning drive program. I've had the pleasure of knowing Bill for years and he's a funny, insightful guy. I listen to his 9 a.m. gabfest as often as I can – probably three or four times a week.

Want to know what we talked about? Here's the broadcast. I come in about halfway.

I'd like to get back to doing some sort of podcast or Internet radio show, but I've not found the time.

In the meantime, I received a SPECIAL OFFER that's just for ME. Look below. 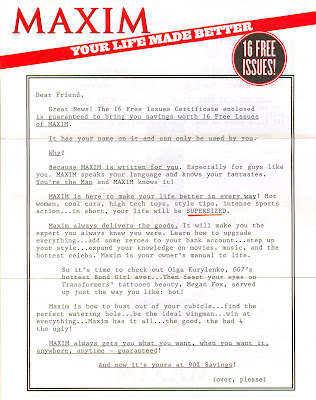 Apparently the folks at Maxim think I'm 25 years old. They think they can "supersize" my life by providing me with latest info on "cool cars, high tech toys, style tips."

"Maxim is how to burst out of your cubicle...find the perfect watering hole...be the ideal wingman...win at everything...Maxim has it all...the good, the bad & the ugly."

I can win at everything by sending these guys $10 for 16 magazines? Everything? Holy crap. Ten bucks would separate me from my hum-drum middle age life, my 2001 Hyundai Accent, mortgage, an increasing thinness of hair, low-hanging gut, lack of fashion sense and increasingly bad attitude?

By the way, what the hell is a "wingman?" Is that a hockey term? I can't skate.

Pretty misogynist, huh? You'd know this if you'd target babes at strip clubs like a real man, instead of treating them like "human beings".

Watch Top Gun...then you'll know what a Wingman is.
And I don't think your attitude is that bad.