This is one of the funniest bits of animation I've seen in a long time:

(Caution: perhaps not the best thing to play at the office)


I was very impressed with two recent animated releases:

For a number of years now I have received screeners of animated features at this time of year so I can vote in the annual Annie Awards presented by the Hollywood chapter of ASIFA, an international organization dedicated to the art of animation.

This past week I was sent two screeners and rather than discuss DVDs in this space, I'd like to call to your attention two animated films one that is currently in theaters here and another I hope will be seen here.

The first is the second animated feature ever to be produced in Israel, "Waltz with Bashir." Filmmaker Ari Folman served in the Israeli Army during the war in Lebanon in 1982. He was 19 and he witnessed the massacre of Muslim civilians by the Lebanese Christian Falangists who were seeking revenge for the murder of their president-elect Bashir Gemayel.

Although enlisted men such as Folman didn't participate in the massacre, other than light flares for what they thought was a different mission for the Falangists, the on-going debate in Israel has been how much did government leaders know and whether or not they allowed it to happen. Thousands of people were killed.

Folman himself has had both recurring dreams about the event and memory lapses and he decided to interview people who had served with him as well as one prominent Israeli reporter about the war and the massacre. He used these interviews as the basis of this outstanding film.

I've often written that what I want from an animated film is an effort to stretch and push the medium from the kiddy ghetto in which it has long been assigned. This film straddles a documentary and an exploration of a dream and frankly, while it could have been done in live action, it clearly works best as an animated film.

Like "Persepolis" last year, this film uses animation to tell a story, not as a pre-sold medium that indicates a particular kind of content. As a painter would chose the medium of his or her choice watercolors or oils, for example in which to convey a vision, Folman has used animation because it makes the most sense for his story.

The animation isn't as lush as some American audiences might expect, but I thought it worked perfectly for the subject matter.

So far this is the film I would pick as the best animated feature of the year, although I'm sure the Oscar race will be won by "Wall-E." 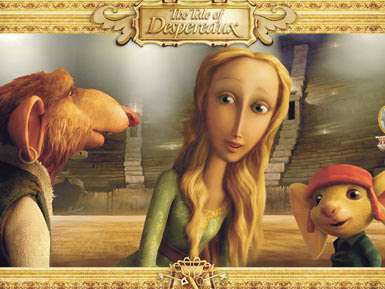 The other film I watched this weekend is the wonderful adventure fairy tale, "The Tale of Despereaux." I haven't read the book by Kate DiCamillo, so I don't know if the adaptation was true or not. The film stands on its own merits, though, and they are considerable.

I can't tell you how refreshing it is to watch a Hollywood mainstream animated family film that doesn't have a musical number, a stupid comic sidekick or any fart jokes. Instead we're offered a compelling story about a mouse who is seen as a misfit in his community, but a hero in ours, who saves a kingdom by adopting the ideas of truth, honor and bravery.

How often have we seen mainstream animation used a medium for a story about forgiveness and redemption? A film that doesn't preach a message, but gives audiences one nonetheless?

Although the film moves a bit slowly at first, I urge audiences to stay with it as I thought the story and characters quickly build momentum.

The voice cast does a great job with Matthew Broderick shining as an understated hero and Dustin Hoffman as a thoughtful and truly human acting rat.

This is a film that truly the whole family can enjoy, although I must say there are scenes that are too intense for younger children. Please leave any child under the age of five or six home with a babysitter.

The Desperaux trailers make my skin crawl so I'm glad to hear the movie itself is better. I look forward to seeing it!

Also glad to hear another movie is succeeding (hopefully!) sans Hollywood formula songs and sitcom gags. It is still sad (to me) to note that Big Name actors are chosen for main characters, for their box office draw, over great voice actors. But glad to hear Broderick and Hoffman do a good job.

That condom animation was the greatest thing ever.