My buddy Mark "Not the Race Car Driver" Martin gave me a barn sale find a Christmas ago – an old ledger that was used by a Springfield area movie and sports fan as a scrap book.

The ads this person clipped and saved are primarily from Springfield, although there are some Boston venues included. Perhaps they too advertised locally for people who could afford to go to Boston for live theater.

The ads are from the early to mid-1920s, based on the release dates of the movies, and show a pretty vibrant town in terms of live entertainment and motion pictures. In fact, the downtown was filled with movie houses.

Something to remember: there were many factories downtown providing a ready and immediate market for theaters and restaurants. For a downtown to succeed people need to be there for a basic, primary reason, such as a job. With jobs leaving downtowns these kind of businesses move with them. 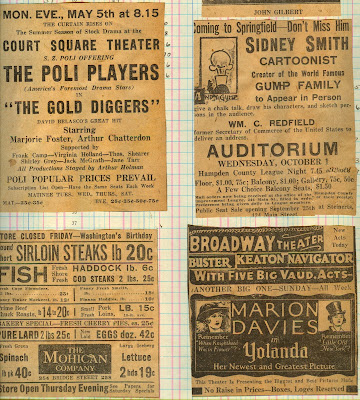 Sidney Smith his comic strip creation "The Gumps" is all but forgotten today, but the long-running feature was popular enough to inspire live-action film adaptations. I think the double bill is interesting to say the least – Smith and the former Secretary of Commerce!

The Broadway Theater was on Bridge Street and featured vaudeville acts with its features. I've never seen "Yolanda" with Marion Davies, but Keaton's "The Navigator" is tremendous.

Before you get all misty eyed about the prices at The Mohican Market, also a Springfield institution for years, just remember people were working for $25 a week back then.

The top one is The State Theatre, which was on Taylor Street near Main. The Goldstein brothers were regional theater magnates whose empire stretched up and down the Connecticut River Valley. My generation will remember The Bing, The Calvin, The Garden and The Rivoli, all Goldstein properties. I don't know when The State ended its run, but its featured live theater and – gasp – burlesque exactly the same it was seen in Times Square! Interesting that the Mardi Gras is on Taylor Street?

The Capitol was next to City Hall where the financial services building now is. I would have stood in line to see Hoot Gibson, one of the best movie cowboys known for his riding abilities – he was an actual champion rodeo performer – as well as his laid-back humorous approach to the genre. I've not yet seen a Gibson silent western, but he was very entertaining in the few sound films of his I've caught.

I'll post more of the material in the coming weeks.
Posted by Mike Dobbs at 4:34 PM