I received a vertaible bounty of bad and marginal cinema this Christmas, thanks to my friends Steve and Dave. Steve's intentions, he told me, was to bathe me with movie cheese and boy did he with two collections of drive-in films from the last 1950s through the 1970s.

I've watched most of the films from a collection of stinkers released by the late Crown International outfit and boy, oh, boy I finally had the chance of seeing "Madmen of Mandoras," an amazing little opus in which Hitler's head is kept alive by a group of Nazis in a mythical South American country who are following his orders for a new attack on the world.

Dave have me one of those 50 film collections – this time one of science fiction films – which included a damn near perfect print of "The Mesa of Lost Women," a totally bizarre film that is in a league with those made by director Ed Wood.

Yeah, I know, why bad movies. Shouldn't I be spending my time watching good movies? Well, I do plenty of that. I'm just fascinated by movies that were made by people who actually thought what they were producing would be entertaining to someone, perhaps only themselves.

I also think that quite often it's easy to get an understanding of an era through its throwaway popular culture as opposed to its "significant" culture.

And I love finding a low-budget throwaway movie that is really legitimately good – that happens more often than not.

Take for example this choice bit of fermented curd: 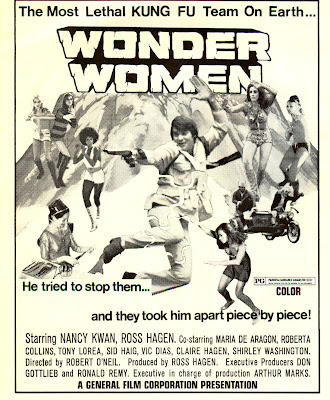 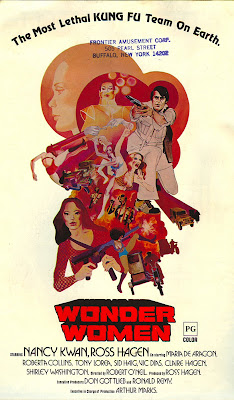 I picked up this press sheet at Cinefest one year just out of "what the heck is this thing?" And naturally I'd love to see it. Here's the trailer.

Now come on be honest, you'd spend 90 minutes watching this, wouldn't you?
Posted by Mike Dobbs at 1:56 PM