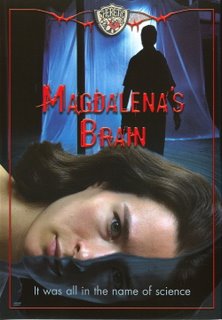 This week it's time to catch up with the torrent of DVD releases that are coming to a store near you.

In the interest of full disclosure, let me say I'm friends with this homegrown thriller's co-writer and producer Marty Langford.

In all honesty, though, I have to say that Langford and his creative partner Warren Amerman have done something one doesn't see too often in the low-budget horror/ science fiction genre: they've substituted gore and nudity staples of the genres with a story and ideas.

The result is a film that might disappoint hardcore horror fans used to extremes, but reward other viewers who are looking for a thriller that will make them think.

Amy Shelton-White plays Magdelena Welling, an accomplished doctor whose husband Arthur (Sanjiban Sellew) is a researcher working on artificial intelligence. A terrible accident leaves Arthur confined to a wheelchair and able to communicate only through a device they built.

Living alone with Arthur in an old factory building, Magdelena continues Arthur's experiments hoping to perfect a means to restore her husband.

The path to a solution isn't an easy one and Langford and Amerman put plenty of twists in the story.

This is a film that harkens back to the school of horror filmmaking perfected by Val Lewton at RKO in the 1940s. Lewton made films that intrigued audiences for not only what was on the screen, but also what played off it. "Magdelena's Brain's" low-key approach suits the story well.

That's not to say this is problem-free production. Although Shelton's White's performance carries the picture, many of the supporting cast just can't reach her level of competency. Langford and Amerman were smart to spend part of their budget on a lead performer who is really good.

They were also smart to devise a script they could actually afford to shoot. Many low-budget productions falter because the script has aspirations the budget can not fulfill.

The look of the film is quite sharp with excellent photography something else that separates this film from the low-budget pack.

The film is now in video stores and retails outlets due to distribution from Heretic Films.

This western from director Ron Howard was not one of his greatest box office success, but I liked it because Howard did something I didn't expect from watching the trailer: he made a western with a horror film sub-plot.

Cate Blanchett is Maggie, a hard-working and embittered rancher who struggles to raise her two daughters and oversee her New Mexican spread. The last thing she wants to do is to see her long-estranged father, played by Tommy Lee Jones. He abandoned his family years before to "go native," and has been living with Native Americans ever since. His reunion with his daughter was on the advice of a native shaman and his visit was well- timed.

One of her daughters is kidnapped by a band of both native and white renegades who sell young women into slavery in Mexico. Maggie unwilling enlists her father's help in tracking down the outlaw band.

Howard clearly has an eye for the requirements of the classic western and he adds his own touch by having the leader of the band a villainous native shaman as a supernatural figure.

The DVD features Howard's extended cut of the film, clocking in at 154 minutes, as well as the 8mm westerns he made as a teen and six featurettes on the making of the film.

The extended cut is unrated, and viewers should know there are moments of pretty brutal violence. John Ford, this isn't.

Having said that, I need to add that "The Missing" is a satisfying western.

In an American Film Institute poll of the best comedy films ever made, this Billy Wilder comedy came in first and with good reason: it's a very funny film.

This new DVD has two discs one with the film and another for a load of features including both archival interviews with the late director and co-star Jack Lemmon as well as a new interview on the making of the film with co-star Tony Curtis.

"Some Like it Hot" tells the story of two hapless musicians (Tony Curtis and Jack Lemmon) in 1929 Chicago who witness a mob murder. Fleeing for their lives, they manage to pass as women and join an all-woman band enroute to an extended gig at a Florida resort hotel.

The script by Wilder and his long-time writing partner I.A.L. Diamond still sparkles after 47 years and the film still can boast of the best final gag ever filmed.

This is an essential addition to any comedy library.

Okay, I'm a nerd. I've always have been and always will be and I suppose that this new "nerds rule" movie was made for guys like me.

Well, this movie simply recycles some of the themes from previous nerd movies and is only distinguished by giving Rob Schneider the opportunity to play the non-nerd in the cast. After the "Deuce Bigelow" films, he must have relished playing the straight guy who is actually married and has a stable life.

Jon Heder and David Spade are not so lucky. They make up the other two of these modern day stooges who are asked to fight for nerd rights everywhere by challenging Little League teams composed of "normal" kids. In this universe, if you're normal, you're a bully.

At some moments this film has all of the cloying sentiment of an after-school special, while at others it's crude and scatological. It's not one to watch with the kids.

I laughed four times I actually kept track and that's not a very good count for a feature-length comedy.
Posted by Mike Dobbs at 6:04 PM