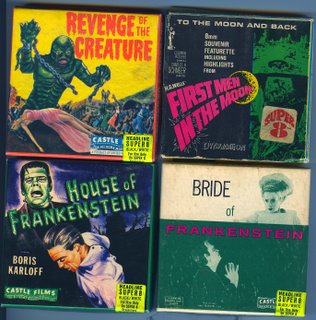 Hey, look what my father-in-law gave me!

In the DVD age, young people might scratch their heads and wonder why I'm so impressed. Back in the day....old school...hardcore, this was what movie collecting was all about.

You'd go to the camera department of a department store and there would be a display of these things. Of course, if you were a real buff, you'd order entire silent films on Eight or Super Eight from Blackhawk Films or from Sears.

I always wanted to order these amazing looking films I had read about...Phantom of the Opera, Nosferatu...but that never happened.

By the 1980s when people were starting to make student movies with Super 8, you could even get Super 8 sound prints of films. The prints had a magnetic sound track so you had to be sure you did wave any magnets around them!

I know it hard to believe that anyone would make an evening's entertainment out of these edited films ( there were also cut-downs that ran about 10 minutes), but people did. In the home movie world having these little films gave you the feeling that you were a collector, and exhibitor.

I still have my cut-downs of Captain Marvel and some W.C. Fields films. My father-in-law also gave me two projectors so I will be running all of them.

Anyone want to come over for a movie show?

Heh. I'm game! As a matter of fact, I have a small box of movies I got at a garage sale, years ago -- five inch reels? -- that includes some Buster Keaton, Clara Bow, and a particularly tempting one that seems to be early 20th century views out the window of a skyscraper in NYC.

Hey, Mike, check out my Home Movie Day report on my blog (www.srbissette.com/theblog.html) for another slice of 8mm and Super8 nirvana.

I HAD all four of those reels, and still have the REVENGE OF THE CREATURE one in my collection (but no projector). Sigh -- ya, let's do a movie night, soon.

There's a book out on the history of Castle Films, which I'd love to find. Hmm, maybe a marketing niche here: history of Ken Films?

I also had some 8mm films that were cutdowns of British films (COSMIC MONSTERS was my fave, though I also had color cutdowns of CURSE OF FRANKENSTEIN and others from this series) that came with a SOUNDTRACK record you'd cue up for projection -- very cool, and my only 8mm sound experience. Wish I still had those curios!