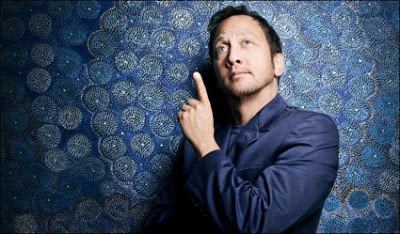 Rob Schneider was a gentleman and someone I could talk to for a long time as he really is a student of comedy.


Rob Schneider is more than a successful comedian. Speak to him for just a few minutes and you realize he is a true historian of comedy.

The former "Saturday Night Live" cast member, who has starred and co-starred in a string of popular movies will be performing at the Hu Ke Lau in Chicopee for two shows on Dec. 28.

Among Schneider's credits are films such as "Deuce Bigalow: Male Gigolo," "Deuce Bigalow: European Gigolo," "The Hot Chick," "The Animal," "You Don't Mess With The Zohan," "The Benchwarmers," "50 First Dates" and "The Longest Yard."

Schneider explained to Reminder Publications that he has been doing more stand-up comedy in the last few years in part because the late George Carlin inspired him. Schneider started out as a stand-up comic, but said, "I never got to the place where I thought my stand-up was great. I never conquered it."

When he saw Chris Rock perform, he decided to get back on the road.

"It feels good," he said, but readily admitted that traveling was tiring.

He said the difference is now — since there has been a 20-year gap in performing live — "I feel I can take the audience further and talk about things that interest me."

Schneider also enjoys the freedom of performing live on stage, a freedom that he didn't find during his recent television series, "Rob." A mid-season replacement series, "Rob" was based on one part of Schneider's life: his marriage to Mexican television producer Patricia Azarcoya Arce.

Although the show attracted 11 million viewers a week, it was cancelled.

Like all television shows, network execs tried to tweak the comedy.

"It's frustrating to get notes from people who don't know as much about comedy as you do," Schneider said.

He is philosophical about the cancellation, though.

"It's their money, it's their stage. You're just renting it," he said.

The show did give him the opportunity to work with one of his comedic heroes, Cheech Marin. Half of the legendary comedy team of Cheech and Chong, Schneider remembered the joy he had as a child listening to their comedy albums. Marin, he added, has "a lot of charisma and is very funny."

Marin, Schneider explained, like many successful comic performers has been typecast.

"Very few people can break [a typecast]," Schneider said. "You're stuck, but it's a good stuck. At least you're being cast."

Despite his less than pleasant experience with a television series, Schneider is looking at another potential show, this one based on a hit Australian series called "Mother and Son." The premise is about a man who cares for his aging mother who may or may not be suffering with dementia.

Some of the Schneider's film work has been in starring roles, while others have been co-starring. In "Judge Dredd," Schneider's character did a spot-on impersonation of Sylvester Stallone to the action star's face and Schneider recalled Stallone telling him, "You better be funny or you're dead."

His association and friendship with Adam Sandler has been without any death threats.

Currently Schneider is working on an animated feature, "Norm of the North," playing a polar bear Norm. He is enjoying the work as he said it allows him to "really create."

Since he and his wife are recent parents, he is interested in finding work such as this assignment that keeps him closer to home.

Schneider believes that there is a renaissance of comedy going on today and has a theory that when the economy has its problems, the arts flourish. He noted that after WWII, Great Britain was having problems returning to its pre-war conditions.

"There was a feeling things were not going to get better for the English," he said.

In reaction to what was happening, came the very successful comedies starring Sir Alec Guinness from the Ealing Studio, Schneider noted. Post-war Great Britain gave birth to Monty Python, which Schneider said "was the high water mark for comedy in the 20th century."

Schneider sees performers such as Louis C.K. as part of that renaissance born out of our own problems.

He said that he would like to produce a television series on the history of comedy. Considering his busy personal and professional schedule, Schneider added, "Eventually."