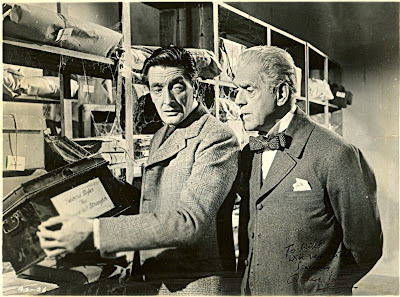 This is a difficult piece to write as the journalist in me is trying arrange the facts in a logical sequence, but the memories are spilling out of my head in a haphazard way. On one hand I want to write an entertaining piece about my friend Richard Gordon. On the other, I want to cry.

Other than my father, there have been two men I’ve known who’ve made a profound and positive impression on me: the late animator and artist Myron Waldman and movie producer Richard Gordon, who passed away at the age of 85 on Nov.1.

Richard – or Dick to his friends – was the almost last of the independent producers of low-budget horror and science fiction films who rose to prominence in the 1950s. His only contemporary who is still alive is Roger Corman. Like Corman, Dick never really retired and maintained an office from which he made deals to keep his films and the ones he represented on television and on home video.

Although he refused to upgrade to a computer – he steadfastly stuck to his electric typewriter, telephone and fax machine for his business – he sold licenses to put several of his films on the AMC website. 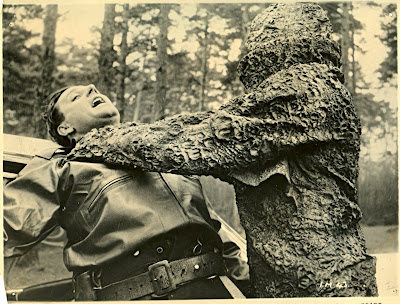 I met Dick at a Cinefest in Syracuse NY in either 1984 or ’85. A friend of mine at the time had been corresponding with his older brother Alex – also a film producer – who was also at the three-day film festival and he convinced a group of us that we should make the four-hour drive to Syracuse to meet Alex.

We did that and met Alex and Dick, who were amazingly gracious gentlemen. One of our group, an ardent Bela Lugosi fan, knew that Alex and Dick befriended Lugosi and that Alex had written a Lugosi vehicle for Ed Wood, “Bride of the Monster.” The fan asked Alex who was a better actor: Lugosi or Boris Karloff, and I saw the first instance of Alex’s skillful diplomacy as he somehow dodged giving a potentially disappointing answer.

I interviewed Alex for a radio show I was hosting at the time and made arrangement to meet Dick in his office in New York City for an interview. Again, he was the epitome of an English gentleman and we became friends.

Dick and Alex were movie fans down to their DNA. As kids in their native England they were the heads, respectively of the country’s Buster Crabbe fan club and Gene Autry fan club. Alex eventually worked for Autry in several capacities. Dick had an over-sized portrait of Charles Middleton as Ming the Merciless from Crabbe’s Flash Gordon serials that Dick received as a boy. It was personally inscribed to him.

World War II interrupted their plans – both were in the British military – and the brothers came to the United States in 1947 to pursue a career in film. Dick once told me that his father urged him to go if that it was what he wanted to do.

Dick and Alex were among the first filmmakers who were movie fans. They were probably the first fan boys who made that leap to be successful participants. 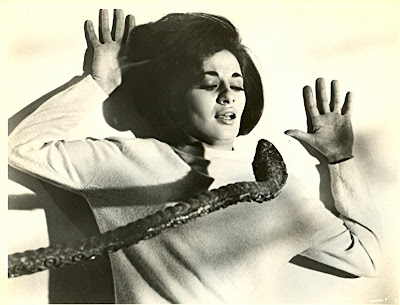 
They both sought to make movies with people they admired and subjects that interested them as fans. Alex was the first producer to cast his films with his own favorite actors – something long before Quinton Tarantino ever did.

Dick and Alex both had a razor sharp memory when it came movies. Dick could recount not only details about a film he saw as a kid, but could tell you where he saw it. His taste in movies was quite broad. Fluent in German, Dick was very knowledgeable in German cinema from the silent period through the present. On the other hand, if you had a B-western to give him, he would welcome that with a smile.

I would always visit Dick every time I was in New York and he was there. He was a very active traveler for many years and he liked to go on tours of foreign counties, always some place new, but if he was in-town, we would get together for lunch or dinner.

The annual Cinefest, though, was the chance to spend greater time with him and to watch movies together. He could be quite critical of the varied offerings at the festival, which specialized in American and British films from the silent era through 1950. I never saw him walk out of a film, but he could certainly roast something he didn’t like.

Over an often-mediocre meal at the hotel dining room at the festival, Alex and Dick would tell stories about their films. I wish I had recorded them. For instance, both men were fairly critical of the movie “Ed Wood,” as Alex had been an intimate of the notorious director and Dick knew Lugosi very well. They strenuously objected to the scene in which Lugosi called Karloff a “cocksucker.” They said Lugosi would have never used such language.

Dick was never a name-dropper, but as he spoke he would continually surprise me. I never knew he had tried to set up a film deal for legendary director Fritz Lang. He told me how Lang had introduced himself to Dick’s secretary as “Dr. Mabuse,” the super-villain he had created for several memorable films. Fiend Without a Face

I was also a little shocked that William Burroughs had offered Dick the screen rights to his notoriously un-filmable novel “Naked Lunch.” Dick met the author through theater owner and director Antony Balch with whom Dick made two movies, “Horror Hospital” and “Bizarre.”

One of the best dinners was the one time my wife Mary came to Cinefest. We dined with Dick and two of his directors, Norman J. Warren who helmed “Inseminoid” and Radley Metzger who made “The Cat and The Canary.” They all showered Mary with attention and performed a bit of roast on each other.

I once asked Dick why he had never attempted to license merchandise for any of his films. There had been some novelizations of his movies in paperback, but I thought he was missing the boat with the horror craze of the 1980s and ‘90s. He looked at me and said, “Why don’t you do it?”

I had fun and a little success. I still have the life-sized “Fiend Without a Face” brain monster that one guy made each of us as a prototype. 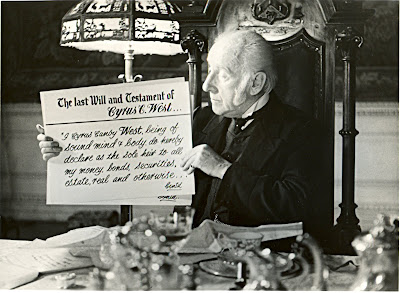 The Cat and the Canary


Dick’s last venture as a filmmaker was his acquisition of a short – a ghost story from 1953 called “Return to Glennascaul” – featuring Orson Welles. Dick filmed a new introduction for the film with director Peter Bogdanovich and managed to get it out on video.

He really wanted to see a new version of “Fiend,” which was best remembered film and several people wrote script and took out options. The “fiend” did appear, however, in the film “Loony Tunes: Back in Action,” thanks to director Joe Dante.

At one point there was a hint that a publisher might be interested in a novel based on the film. Steve Bissette and I came up with an outline for a sort of a sequel and Dick was appalled. We had one scene in which the brain monsters were gathered in the woods around a campfire with the one human they had taken a collective liking to!

So, we tried again. I worked on the second draft and tried to solve some problems set up in the film that modern audiences just wouldn’t accept. I remember very proudly that Dick was extremely pleased with it. The intended publisher was no longer interested apparently in such projects and the book quickly faded away. In a way, I didn’t care. The one audience I truly cared about pleasing was happy with what I had done. 
Why was Dick’s career so long? I think that one thing that contributed to it was an economy of scale. Richard never expressed an interest in having a studio or producing multiple movies at a time. Each film received a lot of attention from him.

Dick’s career extended years beyond his being an active producer because he had the foresight to ask for the return of the rights of his films once the initial theatrical release was completed.

I would call or visit Dick and he would tell me how he had sold films to a German DVD distributor or how he managed to get his movies onto French television. His sole complaint in later years was that younger show business executives had no idea who Boris Karloff was, much less the stars of his other films. 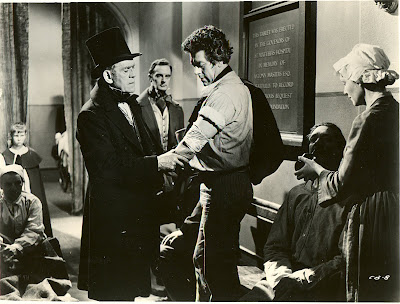 The appeal of Dick’s films could be seen in their almost constant availability on home video. When one license was up, he successfully sought another. The esteemed Criterion Collection was among the licensees and the company released a boxed set of three of Dick’s films and one produced by his brother Alex.

I had asked Dick several times to write a book about him and Alex. He always turned me down partly because he was really a very private person and partly, as he told me, he didn’t want to produce a book that would have stories that were hurtful to people.

Months prior to his death, Richard collaborated on a book on his career with Tom Weaver, who was not only a friend but had interviewed him many times. I’m glad was able to get him to speak about his career and I need to buy the book myself. The last time I saw him, Dick had told me not to do so as he would have a copy for me. Go here for more info. 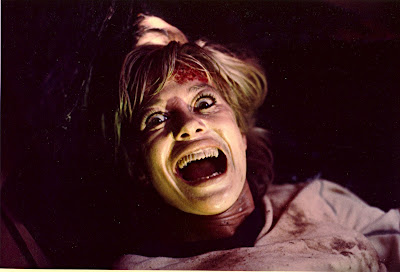 
I saw Dick in June this year. He had been in the hospital with heart problems and he was a little frail. I was concerned, but glad to see him. He wanted to have dinner with me and asked if it was acceptable if I would come with another friend of his. Naturally, I said yes.

We took a cab to Greenwich Village to a French restaurant that was opposite from the French restaurant that was our destination, Dick explained it was his habit – and he was a creature of habit – to go to the first establishment to have a drink at the bar. He loved Harvey’s Bristol Cream Sherry and he said the place was one of the few bars in the city that still served it.

I drank a bourbon, and we then had a great meal at the restaurant where Dick had been dining once a month or so since the late 1950s.

We took a cab back to mid-town and walked Dick to his apartment.

This weekend I would like to reserve some time on the couch and watch some of his movies. And perhaps have a little sherry in his memory. 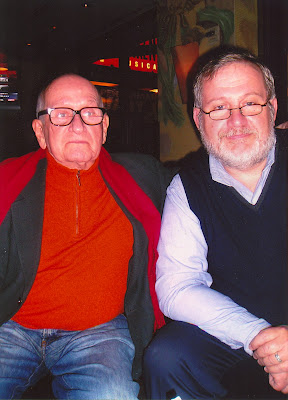 Count me in. Name the time.