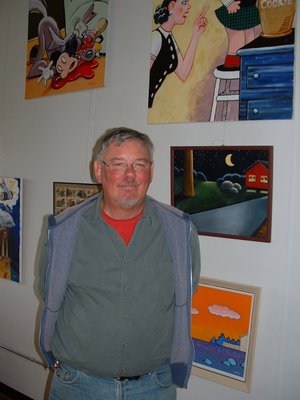 Air Pirates!
I recently interviewed Gary Hallgren, one of the legendary underground artists who were sued by Walt Disney Studios back in the 1970s for copyright violation. He was a nice guy and it was a pleasure to speak with him.

A cartoonist and illustrator whose legal battle with the Walt Disney Studios helped define just how far parody could go is now making his home and career in the Pioneer Valley.

Gary Hallgren was one of the "Air Pirates," a group of underground cartoonists who produced a series of comic books in 1971 featuring Mickey Mouse and other Disney characters doing definitely non-Disney activities.

A prolonged lawsuit was eventually decided in Disney's favor, but the cartoonist and illustrator didn't allow the case to affect his career. He has been commissioned by publications such as The New York Times, Forbes, Men's Health, The Wall Street Journal, MAD Magazine and Entertainment Weekly, among others, for illustrations. He draws much of the syndicated comic strip Shylock Fox.

And he has even done freelance work for the Disney Studios.

Publishers Weekly noted Hallgren's illustrations in its review of You, The Owner's Manual, "The book has an entertaining feel: friendly elves guide readers through illustrations of the body and cartoons feature alien creatures that enter the body and cause illness. The humor is irreverent (e.g., muscle cells surrounding dead heart tissue "start fighting with each other, like Jerry Springer's guests, instead of supporting each other, like Oprah's."

Hallgren lives in Granby with his wife, a native of South Hadley, and daughter, and has his studio in Holyoke at Open Square.

Settling in Massachusetts to live was "coming home to roost, so to speak."

His studio - which Hallgren described as the "best studio I've ever had" - reflects Hallgren's interests and career.

There is eye candy on every wall. A print of a cover of a comic by Robert Crumb hangs on one wall. Hallgren said that in the heady days of the early 1970s no one could have envisioned that artists such as Crumb would have become as popular as they have.

A poster heralding a concert by the rock band of which Hallgren was a member is near his computer as are vintage ads for Studebaker cars.

Hallgren is a life-long Studebaker fan - "always was and always will" - and has restored a Studebaker truck. He is currently working on restoring a Skyhawk.

Hallgren said that he was a fan of newspaper comic strips when growing up and published his first cartoon in his high school newspaper. He noted that some of the acknowledged masters of comic art, including George Herriman (Krazy Kat), George McManus (Bringing up Father) Chic Young (Blondie) and Carl Barks (Donald Duck comics), are among his influences.

A set of books shelves is loaded with art books and collections of comic strips and on the walls are paintings that are Hallgren's takes on vintage comic characters.

Another painting shows a close-up Dick Tracy and his assistant Sam Catchem with the words "Bulletin !! Bullet in!!"
The one Hallgren displays in the window of the studio shows Blondie and Dagwood in bed asleep. Blondie is dreaming of Mr. Beasley, the letter carrier, while Dagwood has Betty Boop on his mind.

These vintage characters may not be familiar to younger people today, but Hallgren said. "They have been in my brain since I was a little kid."

While copyright laws prohibit him from reproducing these canvases, he is allowed to create singular works.

He said that he enjoys playing with these icons of popular culture.

***
Re-constructing Mickey
He graduated from Washington State University where he studied painting and design. After graduation he trained as a sign painter.

Hallgren had his own sign painting business when he first met Dan O'Neill, then the creator of Odd Bodkins, a successful syndicated comic strip, at a rock concert in Washington in 1970.

Hallgren recalls that O'Neill was drawing comic strips about the rock concert from the media tent set up at the concert.

"I was impressed that an 'over-ground' artist was at the rock festival," he said.

O'Neill was impressed with the lettering Hallgren had done on a side of a van and wanted to meet the artist. Hallgren said that he had been thinking about trying to break into the undergrounds but had no idea where to start.

When O'Neill invited him to California to start up a studio and take on the Disney Studios, Hallgren said, "It sounded like a plan."

And with the publication of three comic books that used Disney characters to lampoon their own image and contemporary politics, Hallgren said, "We did do what he [O'Neill] said. We were focused enough to make it a semi-reality."

The Disney Studios did sue them for copyright infringement and the case was not resolved until 1980. The court decision helped clarify the limits of parody and use of copyrighted characters.

Hallgren said, "Knowing what I know now, I would have handled things differently." And yet he added, "I would do it all again."

He is still in touch with Flenniken and with O'Neill and said there was an effort to put together a reunion project, but it proved not to be financially worthwhile.

Hallgren has long wanted to have a comic strip of his own, and has come close on several occasions to closing a syndication deal. He was in the running for taking over Nancy and had proposed a comic strip based on the Eloise series of children's books.

He was considered for both assignments based in part on his ability to copy the style of other artists.

In several illustrations for magazines such as Entertainment Weekly, he showed his skill at capturing various styles in illustrations on the animation industry.

Hallgren was interested in working in animation and was approached to come to Los Angeles to work at Games Animation, the studio then producing the Ren & Stimpy cartoons. Hallgren was hoping to become a background painter - he was a fan of the show - but instead he was seen fulfilling a role of "a minder," Hallgren said.

He was seen as an older artist who could be a role model to the younger ones and manage them to make sure they made their deadlines.

That wasn't for him, he explained.

When asked if he had a favorite project, Hallgren paused and then mentioned a magazine cover. When told this reporter hadn't seen it, he walked across the studio and brought back three leather art portfolios to a table.

Inside were hundreds of pieces of art, mostly by Hallgren but also original by O'Neill and others.

Hallgren never found the cover illustration, but a quick look through the pages of the portfolios was like taking a whirlwind tour of the artist's life with illustrations from major mainstream magazines, art for video boxes, and original pages from Hallgren's underground comics.

Hallgren has had a busy and successful career in illustration since 1979 and he is concerned about the future of illustration, as more and more art directors have turned to the use of stock photography to accompany articles, instead of commissioning original illustrations.

Unlike many other artists today, he still works in traditional artistic methods and does not use a computer to aid in drawing or coloring a project.

He isn't a Luddite, though, and he would like to "get a presence going" on the Internet.

He is considering launching a web site, though, to showcase his years of work. His plan is to post a new item each day.

He had a crew cut butchwax thing going when I met him a couple of months ago. I'm glad to see he's going for the windswept look now - FABULOUS!

Wow! Gary Hallgren was one of the best -- not only able to copy other styles, but he had something to say and an underlying style that always made his stuff worth looking at.

Heh. I'm gonna have to make my way over to Holyoke some time. I think I applied for a job at that place, but didn't get it, alas.

I didn't realize until this evening that the caricature of me that hangs on my bedroom wall was done by a famous artist. Hallgren did me on the sidewalk in Provincetown over Labor Day Weekend in 1977. A great likeness, and the colors have held up very well.

I am pleased to hear from cforeman that the colors I used in 1977 have held up. I was careful to always use the permanent palette of Luma dyes. There must be a few of those caricatures still hanging out--I did them summers in P-town between 1973 and 1980, winter 1977 in St Thomas, and again in Port Jeff LI 2000-2003. A few thousand total.

Hey Gary, if you every read this thread again, it's Ben from the 70s in P-Town, I did the belts for the MLF when I was carving belts for Speedy, (still have my MLF card, the only thing I have from those days except my lap steel and my first musician's union card.
We had some great times. Hope all is well with you.
B.K. member 748.

A fave memory of mine involved a bulletin board at the Undergrad Library at Mich. State U. They'd post stuff of general interest... intellectual "eye candy", as it were, so I'd stop and have a look whenever I walked in the door.

This one time, they had a feature article on the future of telecom. The author had presciently divined that the upcoming shakeout involved a race with 1) computer/network tech ascending to encompass interpersonal electronic communications, vs. 2) telecom upgrading their computing prowess to encompass organizational data processing needs, as well. The artist did a fantastic job of capturing this tension, and the WSJ gave him the top half of the cover page of the feature section to show us: It showed two towering characters, back-to-back, on the sides of the frame, glancing paranoiacally over their shoulders at each other. These characters were: A large phone character clicking away at the little PC, and a large computer character punching away at a little phone dialpad.

That was a very nice visual summary of the theme of the article.

But the surprise came when I glance at the bottom of the cartoon panel and notice a great little bit of detail: It showed tiny little people, dwarfed by these gargantuans, running away from us, pell-mell, as though from impending doom! I recognized the style and for the first time it occurred to me to scout out a signature on the piece.

It was Hallgren! Delight and joy! Sure, the system enlisted Gary to service its needs, and paid him for it... but he found a way to communicate something in the spirit of what his ol' comrade Dan O'Neil once said: "The computer runs the system, and the system runs us... ragged!"